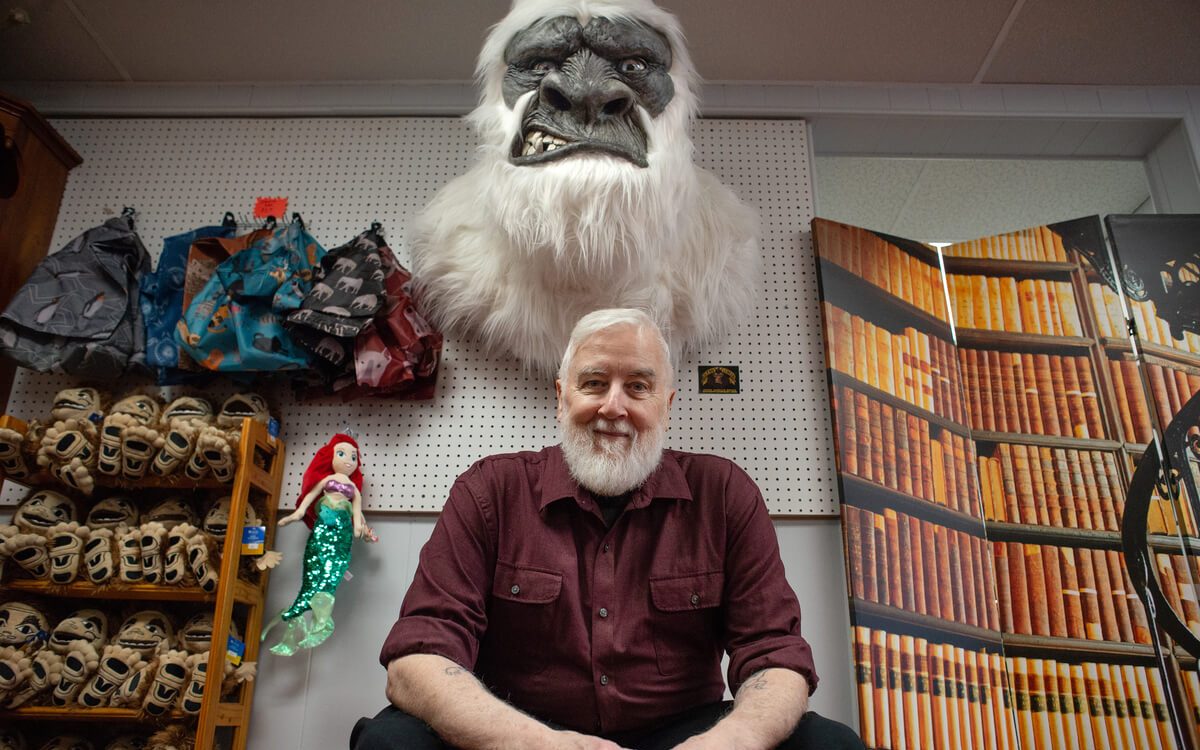 The International Museum of Cryptozoology just opened its new Bangor outpost on Hammond Street this week, after announcing the bookstore and gift shop last fall, and Bigfoot hunters, paranormal enthusiasts and simple curious have already stopped to visit.

Cryptozoologist Loren Coleman, executive director of the nonprofit organization that runs Portland’s flagship museum and now Bangor location, stocked the shop with artifacts, specimens and curiosities, as well as books and gifts and archives full of thousands of Coleman’s books on cryptozoology and related subjects, which people will be able to visit by appointment and which will open later this year.

“We were hoping to have been open for Halloween last year, but we really wanted to do it right and find some really unique items for Bangor,” Coleman said. “We wanted to find artifacts that really spoke to this region.”

Some of the most eye-catching things on display in the shop include Frosty, a huge sculpture of a yeti head that’s mounted on the wall, and a replica of the Minnesota Iceman – a six-foot hairy hominid believed to have been originally found. in Vietnam – whose supposedly frozen body was displayed across the country throughout the 1960s.

There’s also a Fiji mermaid, a cryptid hoax popularized by PT Barnum, a selection of stuffed animals, and many smaller items, like casts of supposed Bigfoot footprints, and even a small version of the Cherryfield Goatman, a half-human, half-goat wearing a flannel shirt, reportedly spotted in the Washington County town in the 1950s.

Clockwise from left: A replica of the Minnesota Iceman is on display at the International Museum of Cryptozoology Bookstore on Hammond Street in Bangor; Frosty, a large, custom-made yeti head, is mounted on a wall; A book about the mysterious Bigfoot. Credit: Linda Coan O’Kresik / BDN

Coleman has studied cryptids, the term for an animal whose existence is unproven, for nearly five decades. He has written more than 40 books on various cryptozoological topics, has consulted, and been interviewed for movies, TV shows, and documentaries.

It opened its first museum in Portland in 2003. Since then it has expanded twice, first on Congress Street and then to a much larger space at the Thompson’s Point development on the River Fore in 2016. last year, Coleman bought the building at 585 Hammond St. in Bangor, and also bought a house on the West Side of Bangor, which he and his wife moved to earlier this year after selling their Portland home.

Now that Coleman and his wife, Jennifer, are new residents of Bangor, he looks forward to getting more involved in the community. The shop has previously partnered with Bangor’s SK Tours, Stephen King-themed Bangor tours led by Jamie Tinker, to bring guests to the shop when it’s open.

“We’ve already seen a lot of people who are interested in what we’re doing out here coming out of the woodwork,” he said. “I’m excited to meet more people in the community.”

The store will only be open from noon to 5 p.m. on Fridays during April so that staff have time to add a few extra details to the space, but from May Coleman plans to extend the hours. throughout the weekend.