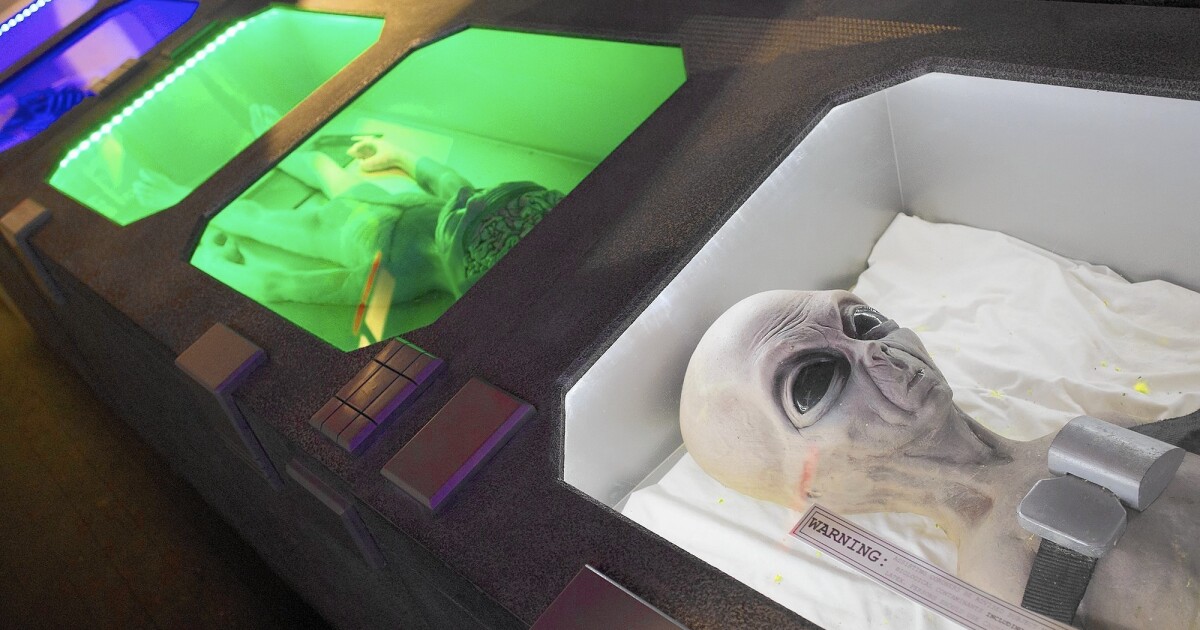 UFOs have landed in Anaheim.

Inside the city’s GardenWalk center, in the suite formerly occupied by Tommy Bahama, is a new exhibit titled “Encounters: UFO Experience”, which organizers call a Beginner’s Course in Ufology – The Study of Recordings. visuals and other suspected unidentified evidence. flying objects – which will appeal to children and adults.

â€œIt’s a 101 on UFOs,â€ said Brian Bouquet, a resident of San Juan Capistrano who curated the content and created the script.

The exhibit, which opened on January 1 and is slated to run through May 31, features galleries containing replicas of ufology-related artifacts, as well as informative videos and texts, all on approximately 3,800 square feet.

After passing the entrance, which is highlighted by an ET replica of the classic 1982 film, guests enter a gallery dedicated to the “ancient aliens” hypothesis, which theorizes that aliens visited Earth and influenced primitive humanity.

Inside, viewers can learn about the mysterious Moai statues on Easter Island, the Nazca Lines in Peru, and Pumapunku in Bolivia, where stones precisely cut and held together without any mortar emitted the hypothesis that advanced alien technology served as a construction aid.

â€œWe don’t even have modern cranes capable of lifting heavy rocks in these positions,â€ Bouquet said.

The second room, which Bouquet considers the “military room of Area 51”, immerses viewers in the modern era of ufology, from the 1940s to the 1950s. Meanwhile, the term “flying saucers” entered in the general lexicon, and government entities like the military have begun to pay attention to reports of UFO sightings.

Among the displays is information about the Roswell, NM, 1947 incident when some believe the U.S. military recovered a crashed alien spacecraft and bodies. Replicas of the Roswell Daily Record are among the artifacts, and the different classifications of alien encounters and UFO sightings are described.

Around the corner is the “Sightings Gallery,” where a video broadcasts eyewitness testimony from UFOs. Another video shows footage of spaceships and asks viewers to determine if what they are seeing could be real or if it is a known hoax.

And, especially for children, Bouquet said, is the alien body whose “guts” can be touched.

The gallery also includes a room where guests can listen through headphones to real 911 calls – 82 in total – from people reporting UFOs.

The final room is nicknamed the “Abduction Gallery,” believed to resemble the interior of an alien mothership. It contains species preserved inside jars and attempts to explain ufology from the 1970s to the present day, including some links to pop culture.

To enter the abduction gallery, you have to pass the door marked “Do not enter: an alien autopsy is occurring” and go through a small tunnel where a fog machine offers a strange sensation. The tunnel, Bouquet said, is intended to recreate the feeling of abductees who report seeing a white light and feeling disoriented.

Before exiting the exhibit, viewers can take photos next to a threatening alien from the “Alien” films.

An “escape room” experience, themed on the escape from an alien abduction, is expected to open in the coming weeks. There will be a separate entrance fee.

â€œEncounters: UFO Experienceâ€ arrived in Anaheim after tours in Arizona and South Carolina. About 1,000 people have seen it so far in Orange County, and nearly 40,000 have seen it during its three weeks in Arizona, Bouquet said.

IF YOU ARE GOING TO

When: 2 p.m. to 9 p.m. Sunday and Tuesday to Thursday; from noon to 10 p.m. on Fridays and Saturdays. Closed on Mondays.

Cost: $ 12 for adults, $ 8 for children. Children under 8 are free. Audio guides cost $ 2. The exhibit features a limited-time Groupon special: two adults for $ 14.

Mutual mistrust may have added some X files to UFO era