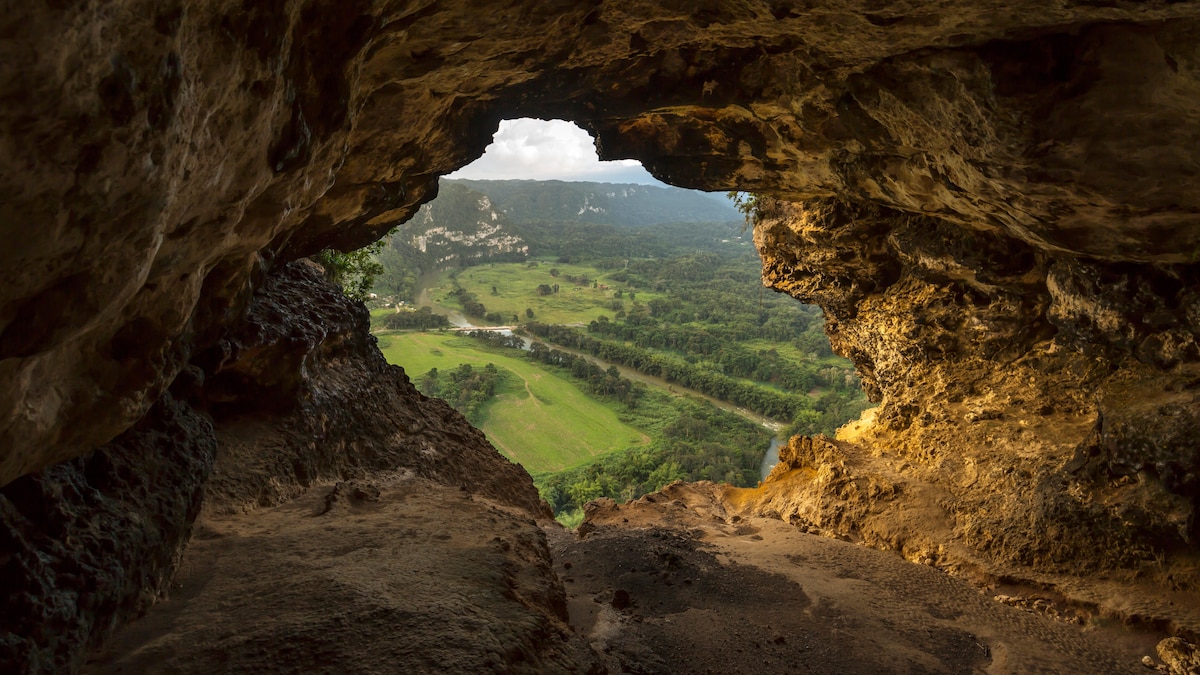 Deep in the lush central highlands of Puerto Rico lies a hidden story that goes far beyond the legend of the chupacabra, a mythical blood-sucking devil dog that has long been blamed for killing livestock and animals. of company.

This remote region is a prime hunting ground for cryptozoologists – people in search of mythical creatures – but for travelers seeking a more tangible adventure, a journey through these mountains reveals an often overlooked experience: the road of Taina.

From ancient petroglyphs hidden in caves by the sea to sacred ceremonial centers in the mountains, this 40-mile-long trail explores the culture of the island’s indigenous Taíno community, using Highway 10 to wind its way through path from Arecibo on the north shore to Ponce on the south coast.

Zoom in to see all the locations featured in this story.

The Taíno people originated from Arawak-speaking migrant communities in South America. Though believed to have been wiped out after the Spanish conquest, the Taíno continue to survive in the Caribbean Antilles islands, Colombia and Venezuela. The heritage of the Taíno peoples is woven into the fabric of Puerto Rico’s identity, from pastels, yuca filled with meat and vegetables, to the traditional weaving of hammocks using maguey plants. Even the nickname used to identify as Puerto Rican, Boricua, comes from the Taíno word Borinquen.

(Meet the survivors of a “paper genocide”.)

Christina Gonzalez, a researcher at the Caribbean Indigenous Legacies Project at the Smithsonian Institution, writes that understanding the Taíno way of respecting the living world is not just about the past or specific sacred spaces, but also about the survival of the planet. “Whatever happens to the resurgence of Taíno, its surviving and reviving spiritual expressions point to a desired and necessary world where the future is ancestral, the future is ancient, the future is Atabey”, one of the two spirits supreme ancestors of the Taíno religion.

Since 2016, a collaboration between archaeologists, the Institute of Puerto Rican Culture and local conservationists has been trying to promote this legacy through the Heritage Trail. As Taíno groups call for more inclusion in how their story is told, there are new opportunities for travelers to immerse themselves in Taíno culture. Whether you rent a car and go at your own pace or join an excursion, here’s where you can connect with the customs that helped shape this intricate island and where to keep an eye out for chupacabras along the way.

Some of the island’s highest concentrations of petroglyphs reside on the Taína Road, from the Cueva del Indio sea cave near north Arecibo, a 45-minute drive from San Juan, to a ceremonial site on the south coast near Ponce. More than intriguing symbols, these carvings of faces, animals, and divine figures from the 7th to 15th centuries provide insight into Taíno’s largely oral history. While the coastal sites along the ends of the road are worth visiting, the verdant central section captures the essence of the community’s spiritual traditions.

In a mountain glade just west of the trail’s central town of Utuado, several courtyards are lined with petroglyph-engraved granite stones, some reaching at least the waist, in the Caguana Ceremonial Indigenous Heritage Center. These squares, called bateyes, are considered sacred places for ritual dances, devotional practices and ceremonial ball games.

“Taíno literally means ‘good people'”, explains Roberto Múkaro Agüeibaná Borrero, president of the United Confederation of Taíno People (UCTP). “The way you interact and the ceremonies the community took part in are what made it ‘Taíno’.”

The Caguana petroglyphs are also among the most vivid of the Caribbean islands, according to Yvonne Narganes, director of the Center for Archaeological Research at the University of Puerto Rico. “They are impressive, alluding to a very ancient and complex mythological tradition,” says Narganes.

Right: Granite stones etched with petroglyphs line one of the many courtyards at the Caguana Ceremonial Native Heritage Center.

The most famous is the crouching figure of Atabey, described as the mother of creation and the conscience of the earth. His prominent figure is a crucial reminder that everything is alive and connected for the Taíno.

To the east is the Jayuya region, named after the Taíno chief Hayuya and known as the indigenous capital of the island. Here, Tres Picachos, the three-peaked mountain revered by the Taíno, dominates one of the most popular spots on the route. A well-marked walk takes travelers to a 13-foot-tall rock covered in petroglyphs called La Piedra Escrita, or the “Written Stone.” It’s not just the sheer size of this artifact or the sheer number of petroglyphs near its top that draw the crowds. The Written Stone sits in the Saliente River, creating a natural pool that helps visitors understand the Taíno respect for an interconnected world.

Just down the street is the Museo el Cemí. The design of this three-branch museum matches the artifacts it exhibits – the this. Typically carved in stone, these spiritual figurines represent and embody ancestral guardian spirits. Like the three sacred mountain peaks, most cemís also have three points representing creation and the overlapping spiritual realms of the living and the dead.

The route ends in Ponce, near the Indios region where a large Taíno population lives today. Rivaling Caguana in size, excavations continue at the Indigenous Ceremonial Center of Tibes. So far, archaeologists have uncovered pre-Taíno and Taíno artifacts dating back to AD 25, which can be explored at the on-site museum.

Vampiric creatures and ghouls haunted the “Island of Enchantment” long before Puerto Rico was at the center of an international chupacabra hunt in 1995. The Taíno believed in hupia, or the spirits of the dead. These shapeshifters could take the form of owls, bats, and humans that would emerge at night with sometimes sinister motives. The most famous hupia, an urban legend popularized in the 1990 novel jurassic parkwas a snarling vampire beast who kidnapped small children after sunset.

(To discover wild America, follow in the legendary footsteps of Bigfoot.)

In 1975, near Moca, Puerto Rico, a bat-like bloodsucking humanoid allegedly killed livestock. A new vampire cryptid called Gargoyle emerged in 2018 near Barceloneta. This two-legged winged predator smelled of sulfur like its predecessor, the chupacabra. Whether people believe in beasts or not, the legend of the chupacabra took root in these hills, adding to the history of lands that still resonate with folk magic.

According to Isla Caribe historical guide Melina Aguilar, the existence of Puerto Rican historical sites over 500 years old is surprising to most visitors and many Puerto Ricans. “It’s not just that people are surprised by what they see when they get here, it’s even there to be seen in the first place,” she says. “And there’s more underground.”

Unexcavated sites and continued restoration need more funding, but the devastating effects of Hurricanes Maria in 2017 and Fiona in 2022 are hampering infrastructure growth. The already isolated areas along the trail are among the last to have utilities restored and damage repaired.

But growth is possible, especially as Taíno activists seek co-management to bring ancestral knowledge to sites. “Why are people who have no connection with our heritage able to tell us who we are and how to present our heritage?” said Agüeibaná Borrero. “As Taíno people, we feel that we have obligations and responsibilities to the land and to our ancestors.”

Borrero says UCTP and other organizations are working to create a centralized Taíno-run community center and directory of Taíno businesses. He invites visitors interested in connecting with locals for tours, oral histories and cultural information to contact UCTP.

Rebecca Toy is a Kansas City-based writer who covers travel, history, and culture. Find her on Instagram and Twitter.