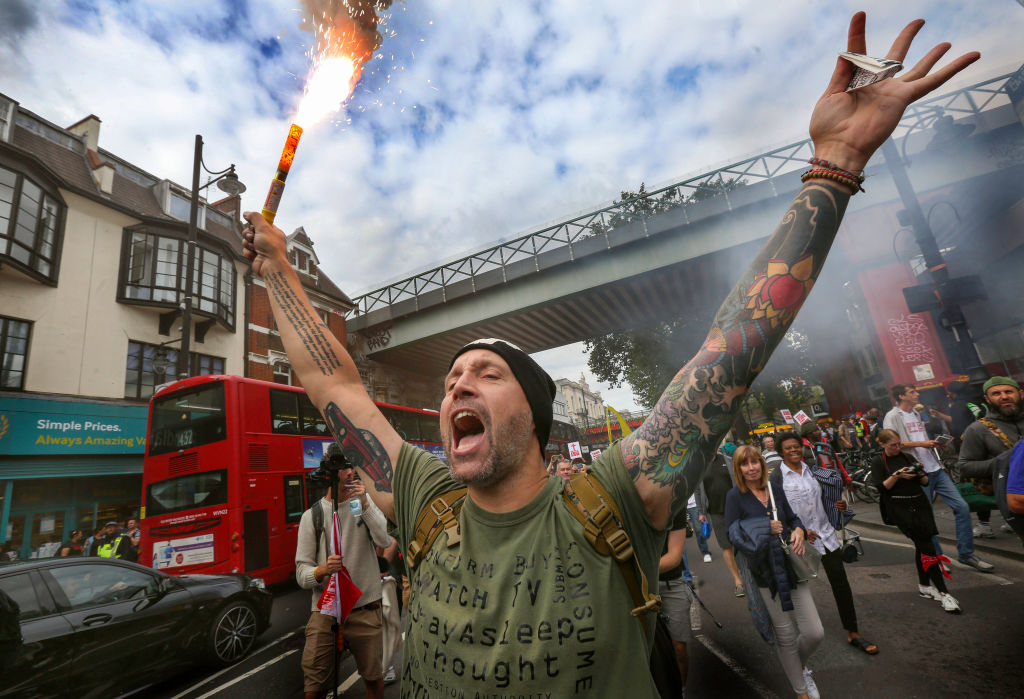 Conspiracy thinking is the result of 40 years of social atomization

I mean, I’ve literally met some dreadlocked hippies talking about QAnon and the plot against Donald Trump. So wait, how did this happen? I think that’s part of the nature of the issues we’re facing right now – that they’re a challenge and they’re a challenge for people on the left. This is a challenge for anarchists in particular, as we have been asked to do things for the common good, which in other circumstances would be considered extreme political coercion (e.g. staying at home to avoid spreading the virus and agreeing to these distancing measures and the wearing of the mask and the like). For people of anarchist or libertarian belief, this can seem very oppressive. Now I happen to think that this is a rare exception to the idea that governments should not be intervening in this measure, as it is in fact a public health emergency and we needed an emergency response. But I can fully understand how this triggers suspicion and anger from people who have long been wary of extreme government intrusion into our lives.

I am someone who is very wary of extreme government intrusions. I think the state should play a very important role in providing public services and protecting us from wealth and predatory behavior. But, at the same time, of course, there must be clearly defined limits on the extent to which the government can interfere in our lives – especially with regard to the legal issues of surveillance and restriction of protests and other essential freedoms. . So it’s difficult, I think, for people of my conviction to navigate. At the same time, it requires strong intergovernmental agreements, just like the climate crisis and the ecological crisis.

It is, to a large extent, an anti-globalization movement. I mean, I never really saw myself as an anti-globalist. In fact, in 2003 I wrote a book called Age of consent who examined how we should recruit globalization to create more powerful left-wing political movements. Anti-globalization localism, home economics, all of these were major themes and they aren’t necessarily wrong – the protests against the World Trade Organization, the IMF, the World Bank in the 1990s and the assaults were, in my opinion, quite legitimate. , because they were exercised illegitimate powers. Again, this moment is difficult to navigate as we see real crises, real emergencies (like the climate emergency) that require intergovernmental agreement. Yet this conflicts with a great stream of thought in the alternative and left movements.

It seems to me that another important factor was the deep discouragement and the feeling of betrayal of the former left parties, which succumbed – really from the end of the 1970s – to neoliberalism and often became very difficult to distinguish from the parties. conservative parties. The parties of the traditional left have toned down their language, their attempts to restrict economic power, and their redistribution and justice agendas. What we have seen, to a rather dramatic extent, has been a linguistic exchange on the part of the old left-wing parties and the new right-wing parties. So left-wing parties are now talking about security and stability. Just yesterday, Keir Starmer, the leader of the Labor Party, published a fourteen thousand word essay called ‘The Road Ahead’ and people literally found the exact same phrases in the 2015 Conservative manifesto. just removed pieces. So you have these very conservative framing of how the Labor Party is going to offer you stability, it is going to offer you security, working families (as opposed to those crooks we don’t like) – this very conservative approach using a language literally borrowed from the Conservatives.

Then you have the radical right: people like Steve Bannon and Dominic Cummings, who stole the language of the left. They talk about freedom and revolution. And I think a lot of people find that very confusing. If you don’t follow politics closely and keep an eye on who everyone is, you hear words like “freedom” and “revolution” and you might say, “Oh, these must be our guys and our friends, because that’s what I believe! I believe in freedom and revolution! So this is a time when we have to be super vigilant and ask questions like: who is saying that? Why do they say it? Who supports them? And we haven’t been vigilant enough.