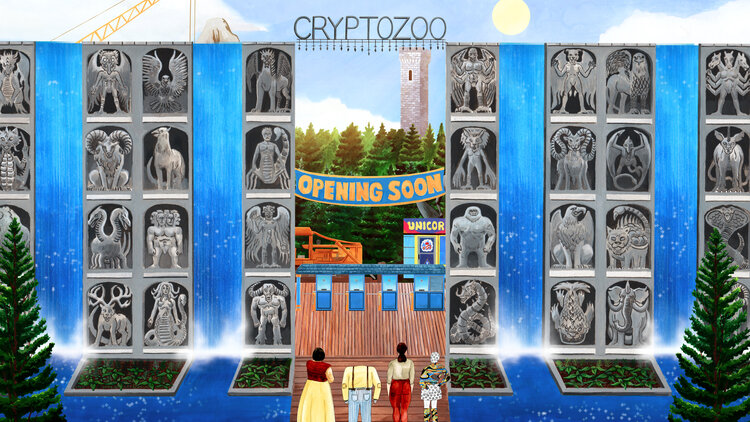 In an age where animated films are made up mostly of CGI animation, with its immersive 3D storylines and hyperrealistic textures of hair, tissue, and light refraction, it’s refreshing to see animators and filmmakers consciously searching for a hand drawn look. One example is the new, multi-award-winning adult animated feature film, Cryptozoo (2021). Written and directed by Dash Shaw with animation by Jane Samborski, it stands out with its psychedelic, retro-inspired aesthetic.

Set in the late 1960s, it tells the story of cryptozoologist Lauren Gray, a former army kid who was hired to maintain a wealthy woman’s collection of cryptids – mythological creatures such as unicorns, griffins, etc. – and protect them from those who would use them as weapons. This endeavor comes at a price, however: in order to raise funds and gain support for its mission, the shrine has been converted into a paid theme park called Cryptozoo.

The graphic style of the film is eclectic. The human figures are rendered in fine pencil lines filled with watercolors, the endearing cryptids present a vaguely skeuomorphic chiaroscuro, and the backgrounds are reminiscent of Paul Gauguin’s lush tropical landscapes. â€œPart of it was in response to our previous movie, which had that huge, thick, wobbly black line that stuck out all of the characters,â€ Samborski told me on a Zoom call that also included Shaw. She was referring to their 2016 feature film, My whole high school is sinking into the sea, which was done in a more abstract style. “The pencil was a natural choice [for the humans in the new film] because we both have a deep love for drawing figures and watercolors [seemed] natural too, â€she continued. â€œWatercolor is a medium in which I like to work; I like the water to have a little wit, and I thought it complemented the delicacy of the pencil.

Shaw and Samborski also wanted to rely on watercolors for the cryptids, but to use an entirely different style from that employed for the human figures; hence the greater dimensionality of creatures. As for the backgrounds, said Shaw, many were inspired by painters he knows from alternative comics. “Something I learned from [animated filmmaker] Ralph Bakshi is that instead of doing a style guide and having the animators all draw or paint in a particular way, you run [the artistic talent] the way you would choose the actors. And so, in the end, the film becomes the orchestration of these different elements.

Samborski praises Shaw’s clarity of storytelling and storyboarding, which comes from his background as a graphic novelist. For her part, Shaw says that Samborski’s talent as a host is at the heart of their successful collaboration, blending old-fashioned fluidity and awkwardness (a desired effect here) as she brings the action that binds a storyboard to life. to the other.

Regarding their influences, the two name the ink drawings resembling the silhouettes of Czech illustrator Heinz Edelmann for Yellow submarine and for the cover of a German edition of the Lord of the Rings; the post-apocalyptic eco-horror movie NausicaÃ¤ of the Valley of the Wind by Hayao Miyazaki, whose moral relativism they admire; and the animation of the dystopian cyberpunk feature film Akira by Katsuhiro Otomo.

The creatures were also inspired in part by The book of imaginary beings by Jorge Luis Borges. Shaw noted â€œthis joy of seeing all these different beings, like a painting by Hieronymus Bosch. You love to see what all these creatures look like.

I asked the duo to choose a scene that exemplifies their creative style, and they chose a sequence starring Lauren, Phoebe (a Medusa-like being passing for human) and the park wardens. The first part of this scene takes place on a beach. â€œThe beach itself was inspired by the paintings of Odilon Redon,â€ said Shaw, and â€œthe water was inspired by a 1980s anime called Gogo 13 which has a very specific water scintillating effect that was glued to my brain while watching an anime.

The second part of this scene consists of a running sequence, as a group of characters are chased by a mega-worm called a kamudi. The trope is well known to anyone who has ever played a side-scrolling platform video game or watched an episode of Tom and Jerry, Scooby doo, or even The stupid symphonies. â€œWhat’s cool about this kind of limited animation – and video games too – is the way you represent space with flat pieces,â€ Shaw explained. “We have the serpent rushing towards us, the trees moving from side to side – spatially, it doesn’t make sense, but somehow, optically, it communicates that he is coming towards us. For this purpose, they turned to another anime from the 1980s, Vampire Hunter D, in which the legs of a character walk towards us but the grass moves from left to right. Shaw said it was “like a magic trick communicating a space with these absurd movements”.

The scene also gave Samborski the chance to fully indulge his inner nerd. Since the creatures in the film are all based on mythological animals that have long appeared in human storytelling, she turned to images of these creatures from different cultures. Her design of the kamudi “was inspired by stone carving from South America,” she said. “This is one of the places in the movie where that angularity that you see in the original source material could really show through in the animation, as well as in the design of the creature itself.”

On the other hand, the way the beast moves, adds Shaw, â€œis it [based on] the creature of Snake, Nokia’s first computer game.

When it comes to animated humans, â€œI completely believe Lauren is an action hero,â€ Samborski said. “She’s got those huge breasts and tiny waist, but she still has a masculinity in her body,” which ultimately makes her a tough, non-doll character, like Lara Croft. â€œIt was a lot of fun to animate because it’s not super typical,â€ Samborski added. “It was exciting to work with that.”

At the same time, the couple are not afraid to sink into ironic moments. In the kamudi scene, a male character takes off his shirt to reveal a well-muscled chest, like the typical idol from an 80s action movie. “I really like this moment,” Shaw said. I made all the frames on it and for me it’s that moment when a random guy takes off his shirt – and we’re, like, See? The way it is rendered is like a figure drawing. “

And how would Shaw sum up the movie more broadly? “It’s half Saturday morning cartoon, half [experimental filmmaker] Stan Brakhage, â€he said. “If this frequency is exciting for you, then the last half hour is a total ride.”