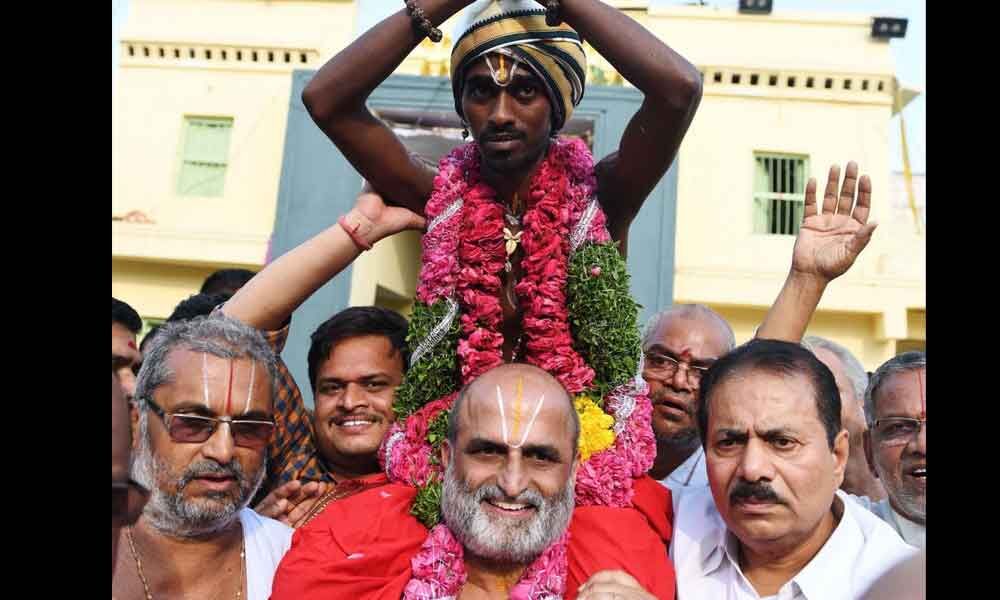 Following the article on the Brahmin Welfare Corporations on the editorial page (THI, October 1), it is unfortunate that Brahmans have faced strong antipathy for centuries.

The basic Brahmanic narrative standing as European accounts from the 17th century to today’s â€œscientificâ€ explanations is as follows: â€œAs a priesthood, the Brahmins mediate between the faithful and their deities through sacrificial rituals.

They are the creators of a four-level class hierarchy, assigning the highest status to their own priestly class and the lowest to the Sudra or servant class.

Traditionally, the learned Brahmin is the beneficiary of many privileges. Lacking military prowess and politico-economic power, minority Brahmins relied on their ritual status to seek a special alliance with the warrior-ruling class.

They reduced the lower castes to a state of subjugation by imposing many restrictions such as denying access to the Vedas and treating them as unclean or untouchable, and preventing upward mobility between castes. ‘

Our textbooks describe the Brahmins as oppressors, exploiters and creators of the caste system. Left-influenced academics with their theories of the exploiter and the exploited, missionaries and brainwashed intellectuals continued British history after independence.

The Brahmins were neither rich nor powerful at any time in history. The current social sciences only accumulate data to show the validity of earlier truths; rarely do they turn around to reflect that these accounts could also be wrong.

Dharampal (The Beautiful Tree) deconstructs the popular idea that education was the exclusive domain of high caste Brahmins, who denied education to others, based on reports commissioned by the British themselves.

A survey from 1822 to 1825 in the Madras presidency showed that the predominant castes in the schools were the Sudras. In Tamil regions, the composition of school children was advanced castes, 13-23 percent; Muslims, 3-10%; and Sudras and other castes, 70-84 percent. In the regions of Malabar, the advanced castes were 20%, the Muslims 27% and the Sudras about 50%.

This is a problem for British historiography because the literacy rate when they left India was around 12%. This was not the result of advanced castes who â€œdeniedâ€ others access to education, but the replacement of the traditional and classical education system with anglicized education.

Several thousand Brahmins lost their lives during the Islamic invasions and inquisitions of Goan, as they were the main target of the invaders’ wrath. FranÃ§ois Xavier clearly expressed his position when he wrote to the King of Portugal, his patron: “If there were no Brahmins, all pagans would be converted to our faith”, calling them “the most perverse people. “.

In many feudal excesses, many non-Brahmin communities as landowners were responsible for the oppression of the poor. One way or another, our social sciences have ensured that the Brahmins become the main villains in society.

Meenakshi Jain writes that the Brahmins played an important role in the freedom movement, confirming Britain’s worst suspicions of the community. Even though for centuries Brahmins and non-Brahmins had been active political and social partners, the cracks were widened by the machinations of the British.

Some British observers like Colebrooke concede that there was little difference in the condition of the Brahmin and the rest of the native population. British census operations, particularly that of Risley (1901), were determined to show race as the basis of the caste system.

British census operations destroyed the flexible jati-varna system and brought caste consciousness to a feverish climax, causing animosities and a general hardening of the system. Caste has therefore become a tool in political, religious and cultural battles.

After independence, many studies have shown that the Brahmins were in a continuous downward spiral. Land ownership has declined. Traditional occupations such as the family and temple priesthood, reciting the Vedas, and practicing Ayurvedic medicine are no longer remunerative or respected.

A few decades ago (1978), the Minister of Finance of the State of Karnataka reported the per capita income of various communities: Christians 1,562; Vokkaligas Rs 914; Muslims Rs 794; Castes listed Rs 680; Scheduled tribes Rs 577; and Brahmins Rs 537.

A study carried out in the former unified Andhra Pradesh showed that 55% of them lived below the poverty line, 10% more than the other groups. The unemployment rate among them reached 75 percent.

The deep antipathy towards the Brahmin community is such that, although it is made up of hundreds of jatis, with no uniform rules of life and social interaction, a success is the result of “privilege” and projected individual shortcomings. across the community across the length and breadth of the country.

This hypothesis places Buddha (Martin Luther of India) as the first reformer opposing corrupt Brahmins and preaching the equality of man. Scholars have shown that Buddhists neither rejected the Brahmins nor struggled against the “caste system”. Buddha and Buddhists regarded varna divisions as a suitable dharmic group of society. Buddhism was just another tradition in the Hindu country where new traditions, sects and gurus are evolving all the time, showing many paths to final enlightenment.

Uninterrupted, this account of the cunning Brahmins continues prominently in introductory works, encyclopedia entries, and other sources as basic facts about Indian culture and religion.

The Balagangadhara school shows that Christian theological ideas regarding the pagan priesthood and idolatry; Aryan racial notions of biological and cultural superiority and inferiority; and anthropological speculations on “primitive man” and his “magical thinking” explained the role of the Brahmins in Indian society until about three decades ago.

These concepts, crucial to speculation about the rise of the Brahmin priesthood, reflected the Protestant and philosophical critique of the priesthood that permeated eighteenth and nineteenth century Europe. 20th century science philosopher Imre Lakatos characterized each research program as having three components: a â€œhard coreâ€ of basic theses and hypotheses; a “protective belt” of auxiliary hypotheses surrounding this nucleus; and a â€œheuristicâ€ or problem-solving machine.

The protective belt allows him to deal with problems by immunizing his hard core against tampering.

Jakob De Roover says that the basic assumptions about the religion of the Brahmins are part of the hard core of this program, while the claims about the Aryan invasion, racial superiority, magical thinking and Varna ideology are part of its belt. protective.

The British attacked the Brahmins for many reasons, but it is sad that our politicians, our social sciences and our society have not looked beyond what the colonists said, even after seven decades of independence.