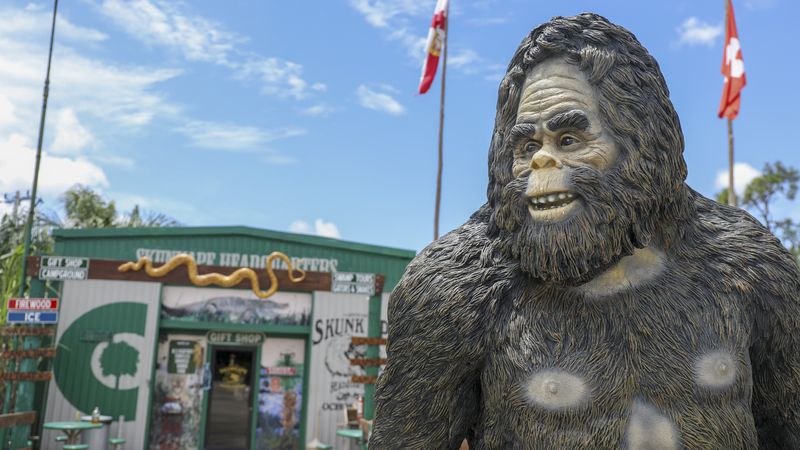 LAKELAND – They are known around the world by various names – Bigfoot, Sasquatch, Grassman, Momo, Honey Island Swamp Monster and others.

But in the Sunshine State, they are known as Skunk Apes, one of the various groups of monkey-like creatures that allegedly inhabit the forests of North America.

Whether these hominid subspecies actually roam the fragmented segments of Florida’s few remaining wildlands or whether they are just funky Florida folklore has yet to be positively determined. But the possibility will be discussed in depth at the first Great Florida Bigfoot conference on Saturday in Lakeland.

From 10 a.m. to 6:30 p.m., at the Youkey Theater of the RP Funding Center, experts from Skunk Ape, cryptozoologists, investigators, myth-busters and Bigfoot-related vendors will come together for a day of discussions and discussions. panels. The focus will be on Bigfoot, but more specifically, the elusive Florida Skunk Ape.

Martin Pippin, organizer of the Great Florida Bigfoot Conference, has been promoting the event since 2017. By phone en route to Lakeland from his hometown of Knoxville, Tennessee, he said the conference will encompass all genetic branches of Bigfoot.

â€œWell that’s why we always have fun at these events,â€ Pippin said. â€œWe’re going to find a number of people who swear from top to bottom that the different branches of Bigfoot have absolutely no relation, are completely different paths. The others say they are variants of the same creature.

In Florida, there are no definitive statistics on Skunk Ape sightings, but the Bigfoot Field Researchers Organization lists 332 sightings of Skunk Ape in Florida, the most recent in January. Pippin said that number may have risen to around 350 by now. And of these, Polk County has 30, most recently in August 2017, when a “tall brown figure was seen standing in the water near Lake Wales”. In the spring of 1995 there was a “possible sighting of daylight by a fisherman near Bartow”.

One of the conference’s guest speakers, Stacy Brown of Crawfordville, Wakulla County, is a Skunk Ape researcher and director. He will talk about his multiple encounters with Skunk Ape, including his premiere on November 6, 2011, off the Apalachicola River, when one of them allegedly approached his campfire. He said he would address the reported Skunk Apes killings in Okefenokee Swamp in 1829, the “capture” of a “wild man” off Ocheesee Pond in Jackson County and numerous sightings in Collier County in the 1970s. He will also discuss approximately 20 seconds of thermal footage of an alleged Skunk Ape that his father, Stacey Brown Sr., filmed along the Apalachicola River in 2012.

Florida has the third-highest number of sightings in the United States, behind California and Washington, and has the most in the Southeast.

â€œI’m going to talk about the Skunk Ape meetings all over Florida. I’m trying to make the case that the Skunk Ape lives on. People think of Bigfoot living in the Pacific Northwest, but the damn thing could be standing here in Florida on your back door, â€he said.

Pippin said between 750 and 1,200 people are expected to attend the conference, along with 12 vendors, a vendor-sponsor, and speakers with tables of merchandise. He said Lakeland was chosen as the site for the 2021 conference because of its “background to a decent number of sightings.”

â€œIf you have the slightest interest or if you are just curious, it is definitely worth coming to see it. Most people come away happy with what they have learned, â€he said. â€œA lot of people have encounters they’ve never shared. It’s a safe space to … get it off your chest. It’s nice to walk into a space to talk about this stuff.

A panel of speakers will be available for an interactive question-and-answer session as well as a public meeting segment.

The first Smoky Mountain Bigfoot conference was held in 2019 in Gatlinburg, where approximately 1,600 people attended. The 2020 Gatlinburg conference drew around 1,300 people when it was moved to an exhibition center to allow for social distancing due to the coronavirus.

If you are going to