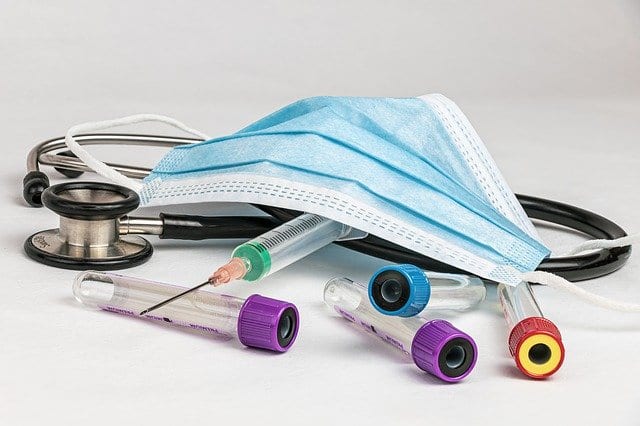 From Delta, Vaccine Conspiracy Theories, Francis and the Leper

The Friendship Room puts the plexiglass back on its porch.

I don’t think the situation with the Delta variant of the COVID-19 virus has really hit home until this weekend. I noticed there were 750 COVID deaths on Friday – strangely close to the thousand a day we had last summer before things got exponentially worse in the fall and winter. I have read of doctors begging people to get vaccinated because this wave of hospitalizations almost exclusively affected adults who had refused vaccination, or children who were not yet eligible for the vaccine. I saw that hospitals in Texas and Louisiana were packed and patients were fleeing life elsewhere. And then I saw the photo the Friendship Room had uploaded, of their tireless volunteers putting plexiglass back on the porch to protect the homeless sheltering there.

I want to cry.

Michael and I are vaccinated against COVID-19, luckily. But Rosie is not. All she wants is to take martial arts lessons again. It was his life eighteen months ago when this nightmare began. I promised her over and over again that things would get back to normal soon and that she could do what she loves safely. She has completely lost touch with most of her martial arts class friends. She cannot even get vaccinated to protect herself because she is not even twelve years old. I have to keep her at home.

No, vaccines are not 100% foolproof. But they make it a lot less likely for us to catch the virus, and they mean that if we do catch it, we’ll probably have a much milder case. If we get a breakthrough case, we can spread the infection, which is why Michael and I always hide in crowded places. But because we’re less likely to catch the virus, we’re less likely to spread it. The more people vaccinated, the fewer cases of COVID overall, which means fewer transmissions, which means slowing the runaway train that the pandemic has become. Our only path to something that looks like normal is for enough people to get vaccinated. Rose’s only path to Taekwondo is if enough people get the vaccine and if the vaccine is approved for children her age.

Somewhere in all of this chaos, JD Flynn of The Pillar, who was recently roasted by everyone including me for his sketchy journalistic ethics, tweeted that this situation reminded him of Saint Francis. And not at all, you might have guessed. Flynn said that vaccinated people fleeing those who refuse vaccines for their own safety and that of their families, reminded him of the story of Saint Francis kissing the leper. He was booed so loudly for this take that he deleted the tweet, but the internet never forgets: 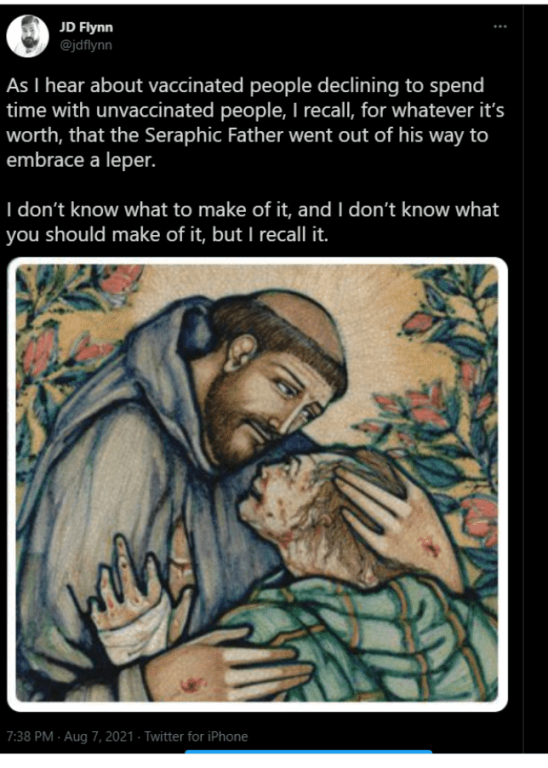 Of course, there is no comparison between the story of Saint Francis kissing a leper and people fearing to be inside with the unvaccinated. The leper was an innocent victim. People who refuse a free inoculation are not. Saint Francis was trying to be kind to a marginalized and vulnerable person, and people who refuse a vaccine for ideological reasons endanger vulnerable people. I tried to stutter so much on social media in response to the tweet.

Someone with a statue of the Virgin Mary for a profile picture started looking for me because of my ignorance. They repeated the urban myth that vaccines are created by slaughtering thousands of unborn babies; you might remember Abby Johnson tried to make the same claim last year. This person added a frightening fantasy that doctors tie unborn babies with duct tape so that they can vivify them “while they gasp to breathe”.

I lost my patience.

COVID vaccines are not made from aborted fetuses.

The closest the COVID vaccines come to being abortion is that they have been tested on the HEK-293 line, which is not a person but a block of kidney cells grown in the laboratory and developed in the origin from a cell taken from an embryo that died in the 1970s and whose remains were donated to science. Not a single cell the vaccine has been tested on has ever been part of a human person, only the descendants of a cell were. Using a drug tested on HEK-293 is, morally speaking, the same level of cooperation with evil as enjoying the benefits of any other scientific research involving a dead body.

And guess what? I’m pretty sure you’ve used a drug tested for HEK-293 once in your life. As my colleague Father Matthew Schneider pointed out, HEK-293 has been used to test Advil, Aspirin, Aleve, Sudafed, Benadryl, Claritin, Robitussin, Mucinex, Tums, Pepto-Bismol, Metformin, Mucinex and Zocor, among others. . The drug former reality TV star Donald Trump took while in hospital for COVID-19, Regeneron, has also been tested on HEK-293. All of these are exactly the same degree of cooperation with abortion as the COVID vaccine. The Pope and a host of bishops have already approved and encouraged the vaccines. There is no controversy about their taking except in the minds of people who think they are better Catholics to see controversy everywhere.

The story of Saint Francis kissing the leper is not a story about why we should all put ourselves in danger when there is an easy and morally uncontroversial way for most of us to help. stop the spread of the pandemic.

The story of Saint Francis kissing the leper is a story that highlights one of our duties as Christians: if there is anything scary or uncomfortable that you are reluctant to do that would benefit or would comfort the marginalized and vulnerable in your community, you should put your fear aside and do it. Like, say, getting the shot even though the injections hurt, the side effects aren’t fun, and social media is full of conspiracy theorists trying to scare you. It’s one way to slow the spread of COVID, protecting vulnerable people. The same goes for wearing your mask in crowded places even if you are vaccinated at the moment, until things are better under control, or until further research proves it is not. is not necessary.

I heard “Faith over fear! For eighteen months now. Here’s one way to put “faith over fear” into practice. Stop spreading hysterical conspiracy theories and get shot.

My daughter wants to go back to martial arts.

The Friendship Room wants to get rid of that stupid plexiglass.

I want innocent children to live.

Don’t we all want this?