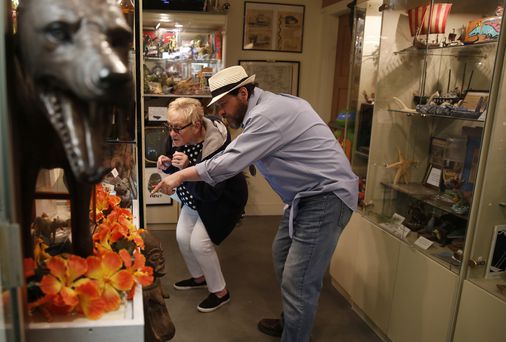 How Portland became the center of the unknown (like Bigfoot, Nessie, the Yeti, all that)

Coleman is the man behind the two, helping to make Portland the cryptozoology capital of the world – the study of hidden and unknown animals that have yet to be verified by science – and to make Coleman, 71, a celebrity just as much. in the field like Nessie and the Chupacabra. When the FBI recently released his Bigfoot files, Coeman’s phone went off the hook with calls from media around the world.

â€œLooking back over 60 years since I was a boy in Decatur, Illinois chasing big bird sightings, it’s amazing how central I have become in this area. Coleman says as another person stops walking to ask him a question.

Coleman, who has white hair and a white beard and the gentle warmth of someone who would make a good Santa Claus, has long heard his name prefaced with the phrase “the world’s greatest living cryptozoologist”, the last step in his life. ‘a journey that began in the 1950s when he saw a movie called “Half Human” about a yeti-like creature.

â€œI went to school the next day and said, ‘What is the yeti? â€Speaking of the ape-like creature believed to live in the Himalayas. â€œThe teachers gave me three answers: ‘They don’t exist.’ ‘Go back to school.’ “And leave me alone. “

So he began his own studies, hunting down leads and rumors, and quickly corresponded with 400 people around the world, asking questions about all the weird animals that had been considered myths.

At 21, he had published his first article in the field. In 1975 he published the first of 40 books, including “Cryptozoology from A to Z”, which came out in 1999 and is credited with popularizing the field among the masses. (He also has a Masters Degree in Social Work and has spent much of his life in Cambridge, Mass., Teaching at various colleges and working with socially disturbed children, and has written extensively on the so-called Imitation Effect. suicides.)

He eventually settled in Maine, and in 2003, having become “tired of having a house full of artifacts,” he opened the world’s first and only museum dedicated to cryptozoology. The museum, which is now in its third and largest location on Thompson’s Point, where it sits between a distillery and a burrito bar, has a giant wooden Bigfoot marking its entrance.

Inside there are over 10,000 articles on Coleman’s travels and investigations, lots of kitsch, like an entire scats case, and a hoax section, which is there to encourage skepticism. Perhaps the museum’s prized possession is a large snakeskin believed to have belonged to Wessie, a 10-foot-long snake that was spotted by several people in the nearby Presumpscot River in 2016 and has become something of a sensation. media. DNA tests identified the skin as belonging to a green anaconda, although many speculated that the skin had been placed there as a hoax and the real Wessie was still there. When this same river developed a giant spinning ice disk last winter that drew in crowds of onlookers, the chilling conspiracies only got worse.

Cryptozoology, Coleman and others point out, is unrelated to the paranormal, although many want to train it. It seeks to be biologically and scientifically based, and although it operates primarily outside the academy, many in academia have tried their hand at the field; the list of speakers this year was full of doctorates.

â€œThe reason I created the conference is because I was going to Bigfoot conferences and it was just plain stupid,â€ says Coleman. “I wanted to talk about it academically.”

His wife, Jenny White Coleman, who helps run the museum, said she is upset when people walk into the museum, look around and say, “This is stupid.”

â€œLoren never uses the word ‘believe’ because it has a denominational connotation,â€ she said. â€œHis feet are firmly rooted in science and reliable data. He simply approaches it with a childlike wonder that he has never lost as he ages.

As Coleman made his way through the vendor stalls, you could see him enjoying browsing t-shirts and magnets, toys and dolls, until something caught his eye and he couldn’t help but take his wallet.

It was a hand-made sculpture of a strange creature with large eyes and tendril-like fingers, crawling along a stone wall. Coleman knows this well; it is based on a drawing he discovered when he saw the illustration hanging in a country store in Dover, while working at a nearby school.

Naturally, he investigated and was the first to interview the three teenagers from Dover who allegedly saw the creature on two consecutive nights in 1977, and it was Coleman who gave it a name, one that is now known in the whole world: the Dover Demon.

“It’s for the museum,” he said with a shrug and a smirk as he slipped the Dover Demon sculpture into a small bag, then continued his journey through this world of the unknown.