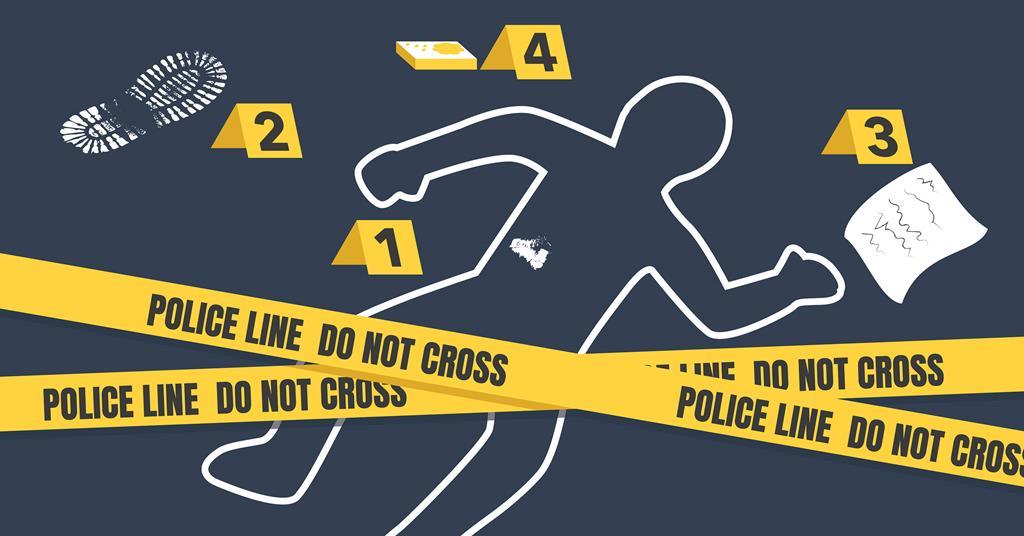 How To Solve A Murder | Ideas

When we finished our introduction to the subject of science with our grade 7 students, we wanted to develop their practical skills and scientific thinking, so we murdered a teacher.

We staged this crime at a two-day, school-wide extension of the program with all grade 7 students. They had a single day, spread over two 100-minute lessons, to solve the crime.

To make sure the students don’t suspect our crimes, we recorded all videos and the 999 call outside of normal school zones. We also created a student instruction sheet and uploaded it to the classroom iPads. That day, the students used the iPads for everything: to get all the clues, find out how to do the experiments, and keep their notes and findings.

Our technicians prepared trays of equipment, one for each of the four suspects and one for the crime scene. Students would use them for their labs to collect evidence. We divided them into five groups and they circled around the sets.

That day, we started by playing the 999 call to the students made by the assistant director of science reporting the murder, saying who she suspected and why. Next, we showed the students videos of the suspects, encouraging them to use their observation skills to make their first deductions. For example, the videos identified two of the teachers as suffering from hay fever.

Using our clues and instructions, the students had to apply their chemistry knowledge to analyze data and make hypotheses. They had four experiments to perform (all related to our GCSE specifications):

2. Analysis of the pH of the sludge

Find out which of the four mud samples in labeled jars matches the pH of a sample from the crime scene mud footprint, using universal indicator paper (GCSE Combined Science).

Run the chromatograms of four pens and compare them with an image of an ink chromatogram from a pen found at the crime scene (GCSE Combined Science).

We arranged the clues so that there were multiple suspects throughout the day, which meant the students had to complete all the tasks, evaluating the evidence from the experiments to identify them as a prime suspect. Some evidence was a red herring, for example the analysis of the powder. The powder could have been on the teachers’ clothes just because they were in the same room. The urinalysis was more reliable, but it led to two suspects, which again forced the students to assess the evidence.

In their groups, the students debated the evidence, learning that as they gathered more evidence, the suspect might change. We liked this aspect because it mimics the cycle of scientific progress where ideas are changed and revised to explain new experimental results. In fact, as a teaching team, we chose this activity because we believed that it would strengthen the scientific methodology and practical skills of the students, while also giving us the opportunity to make connections with forensic and forensic careers and in criminology – while keeping students interested. We identified five learning outcomes: developing practical skills; handle chemicals safely; according to a method; problem solving and evaluation of evidence. Although we organized this activity with our youngest students (11 and 12 years old), we could use it with older groups as well. We just hope the students enjoyed it as much as we did.

Thanks to our colleague, Nina Bull, who now teaches in York, for creating the activities.