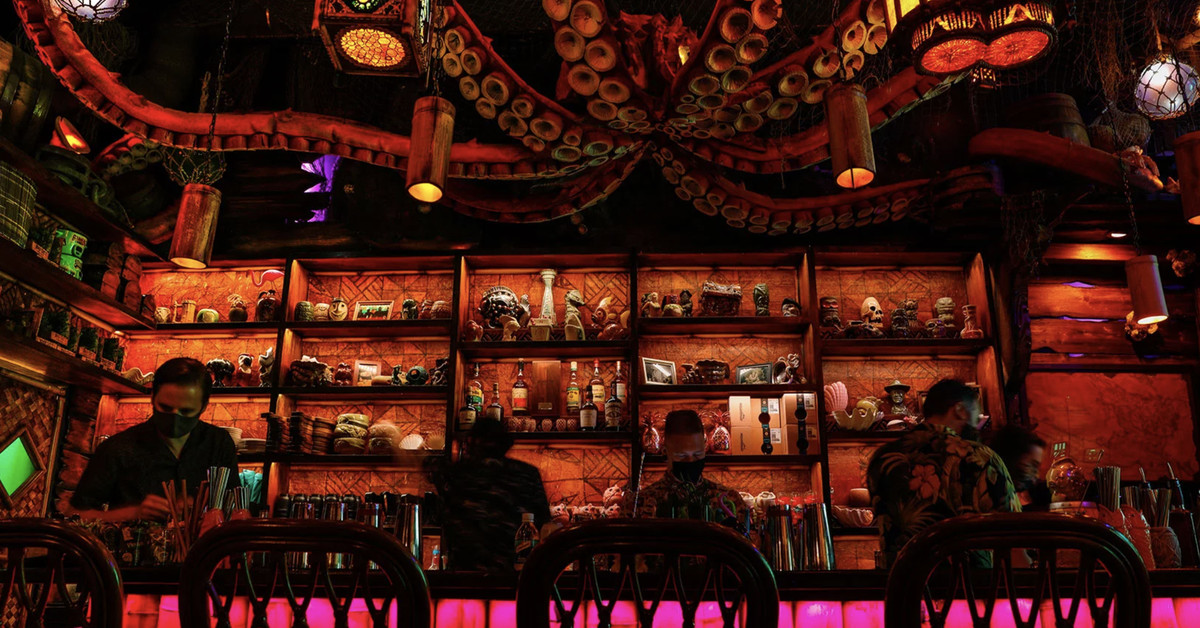 In the works for over a year, Inside Passage – the brother’s bar next to South Lake Union’s Rumba and Aqua Verde – officially debuts on Friday, June 25. There’s certainly a fantastic oceanic vibe inside, with a giant sprawling sea creature hanging from the ceiling, thatched-roof booths, savory snacks, and a variety of cocktails in elaborate mugs.

When the project was announced in 2020, the owners originally used “tiki” to describe the theme, but reconsidered problematic associations with this term, which evokes colonialism and cultural appropriation. “We’ve learned a lot over the past year,” says manager Jen Akin, who notes that the space – designed by acclaimed interior designer Notch Gonzalez – aims to be more nautical in nature and mixes tropical aesthetics. “immersion” with the Pacific. History of Northwestern Shipping (including name). This is reflected in the rubber and foam octopus (which the bar nicknames Kiki), as well as rustic wood accents reminiscent of an old ship.

The kitsch factor is always high, however, with thatched-roof booths and vintage memorabilia scattered throughout the cozy space (formerly a Stussy boutique). And that’s especially true for the mugs drinks are served in, ranging from fish sculptures to 1980s movie references to cheeky nods to PNW cryptozoology. Here, we rank some of the best, in order of Instagramability.

I see a light

This Japanese rum concoction, made with yuzu, lemongrass, mango, and kelp, is served in a mug that resembles an anglerfish with a curved headlamp. There’s even a pulsating colorful bulb tucked away in the bottom to add to the moody deep sea effect.

What would a PNW bar without a Bigfoot reference be? A nod to cryptozoology and the “X Files”, the scotch mix with pineapple rum and coconut cream is served in a canteen, ideal for campers looking for elusive beasts.

Inside Passage managed to collect vintage glasses from the 1962 Seattle World’s Fair for their Copperworks gin and aged rum farm drink, topped with tangerine and almond milk sorbet.

Fans of the ’80s classic “The Goonies” will likely enjoy the gothic, pirate-themed drink with a little dry ice. Inside is an old-fashioned tropical touch, with rum, vanilla and banana.

I have to admit that this Seattle tech giant spinning a cocktail classic (The Zombie) elicited a chuckle at first glance. There’s Novo Fogo silver rum, acai, passion fruit, and allspice, as well as â€œfree same day deliveryâ€.

Inside Passage is open to walk-in people only from 5:00 p.m. to midnight, Wednesday through Sunday. In addition to indoor dining (with a bar snack menu that includes smoked mushroom bao and spam sliders), there are also canned cocktails to take out.


Register to receive the newsletter