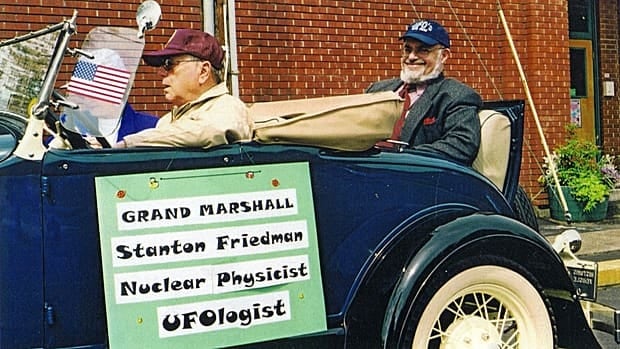 Fredericton-based researcher Stanton Friedman brought seriousness to ufology, so a New Mexico town honors him with the first round of inductions into its UFO Walk of Fame.

The professional ufologist who died in 2019 is recognized as the first civilian investigator of the “Roswell Incident”, the crash of what many believed to be a flying saucer in 1947.

Friedman, who was also a nuclear physicist, is credited with bringing a lot of attention to the possibility of extraterrestrial life.

The 2022 UFO Festival in Roswell, NM will open with the city’s new UFO Walk of Fame on July 1. arts,” according to a spokesperson for the city of Roswell.

Jesse Marcel Sr., a US Air Force officer known for his involvement in monitoring Roswell, will also be inducted into the Walk of Fame. For each winner, the UFO festival will integrate a planet-shaped marker on the sidewalk.

Friedman’s daughters, Melissa Friedman and Rachel Friedman, and Marcel’s grandson, Jesse Marcel III, plan to be in Roswell for the inaugural UFO Walk of Fame ceremony.

As more people are added, the Walk of Fame will expand to the sidewalk along the street, toward the UFO Museum and the Roswell International Research Center, the city said.

MJ Banias, journalist at the debriefingwho reports “strange news” including UFO sightings, said he considered Friedman the first of his kind, a “gentleman ufologist”.

Friedman had a college education and was not the average amateur UFO sleuth, Banias said.

“He created a systematic way of doing ufology that didn’t exist before that.”

LOOK | Fredericton Museum Presents Friedman ‘Out of This World’ Exhibit

The nuclear physicist devoted his life to investigating UFOs from the end of the 1960s. Now, two friends want to devote an exhibition to him.

Friedman made a name for himself through his investigation of the Roswell Incident, a mysterious crash in the desert.

The wreckage was handed over to the US Army base in Roswell, which initially issued a press release stating that a flying disc had been recovered near a ranch. The military later said it was a surveillance balloon.

Friedman came to believe that the government was covering up evidence of an alien spacecraft as an explanation for the incident.

“He opened the investigation, found witnesses to the event, and brought it to life,” said Karen Jaramillo, director of the UFO Museum and International Research Center in Roswell.

We wouldn’t have anything to celebrate if it weren’t for pioneers like him who really took the time to investigate, to examine the science [and] have this passion for the truth.– Juanita Jennings, /City of Roswell

“And everyone always looked to him for the truth, you know, because he did so much research and investigation on his own. … He believed there was something out there. “, said Jaramlllo. “I guess he knew there was a cover-up, and he wanted to get to the bottom of it.”

Jennings said she was skeptical at first, but that changed.

“You see all the evidence on the wall, and you hear brilliant people like Stanton Friedman, and you hear the science behind it all,” she said. “How could there not be extraterrestrial life there? »

Friedman had pledged to prove extraterrestrial life, and he won $1,000 in a bet against a skeptical fellow researcher. about some government documents in the 1980s

American researcher Philip Klass thought the documents were fake, but Friedman thought they were real.

Klass bet Friedman $100 for every real declassified government document that used the same font as the other documents. He found 14 documents with the same typeface and won $1,000 from Klass, who wrote about the bet in his newsletter in 2004.

“We wouldn’t have anything to celebrate if it weren’t for pioneers like him who really took the time to investigate, to look at the science [and] to have this passion for the truth about what really happened here in 1947,” Jennings said.