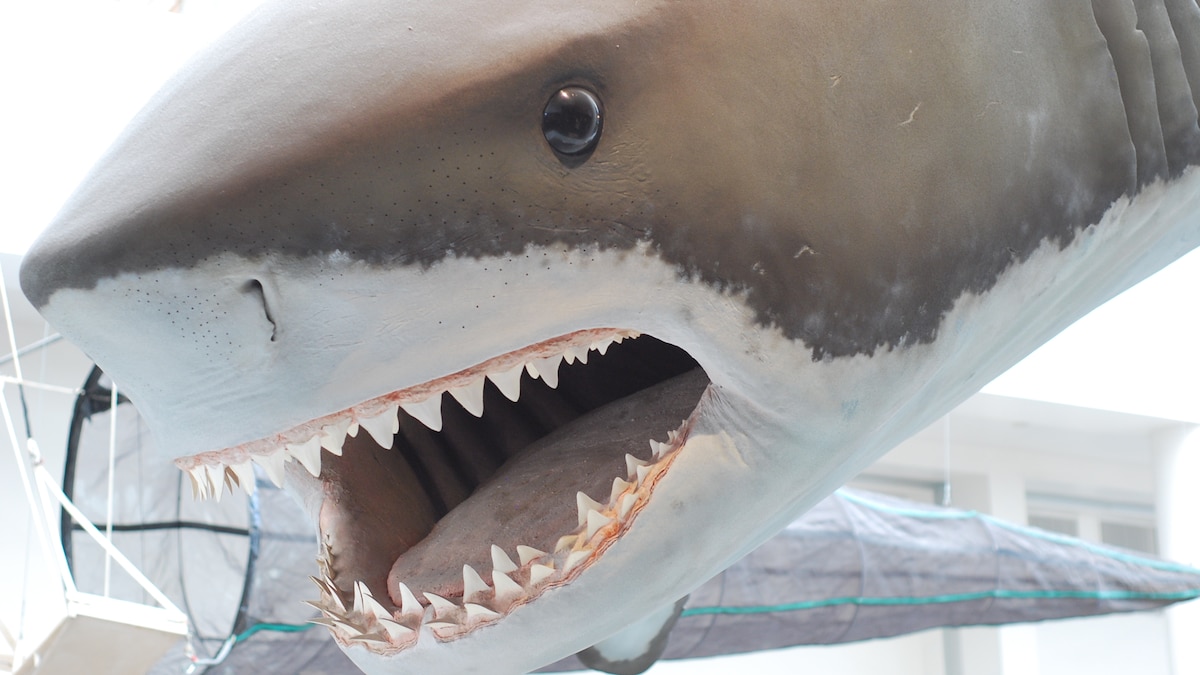 Nearly a century ago, ichthyologist David Stead recorded a strange discomfort in lobsters in Port Stephens, Australia. Although their livelihood depended on the sea, the men couldn’t bring themselves to venture to their favorite crayfish spot near Broughton Island for fear of what they had just seen.

There, Stead recounted nearly half a century later in his book Sharks and rays of the Australian seas, was a monstrous, ghostly white shark of such staggering size that apparently no one could agree on the leviathan’s exact size. The shark was big enough to swallow at least lobster pot after lobster pot, but the size estimates Stead got from the workers ranged from 115 feet to an “absurd” minimum of three hundred feet. Despite this, Stead maintained that the lobsters must have seen something amazing. “[B]keep in mind these were men used to the sea and all kinds of weather,” Stead wrote, “and all kinds of sharks as well. There could be only one explanation for such a horrific sighting, he concluded. This shark, which Stead believed to be of the “white death type,” was a remnant of a very real species that sculled the seas for millions of years. It was the shark that paleontologists now call Megalodon of Carcharocles. Ending on an ominous note, Stead concluded “While they probably aren’t abundant, they may still be.”

Megalodon of Carcharocles was a real shark. *Adults of the species could grow to over fifty feet in length, and their species sculled the ancient seas for an incredible amount of time – around 16 to 2 million years ago. But there are those who insist that C. megalodon still lives. Ichthyologists and natural history writers from Peter Matthiessen to Richard Ellis toyed with the idea, not to mention horror novelists and filmmakers who needed a ready-made monster. Even the now disreputable Discovery Channel has stepped in, concocting a new mockumentary filled with false evidence that C. megalodon has survived to this day. As paleontologist Thomas Holtz, Jr. has pointed out, this is at least a minor improvement over the network sirens. C. megalodon really existed.

The fossil record of C. megalodon depletes in sediments about 2 million years old. The only teeth found so far in younger deposits have been reworked from older strata. Plus, there are no giant, fresh teeth littering the seabed, no whale carcasses with distinctive bite marks washed up on shore, and no hard evidence that the shark exists. And all stories… are just stories. Stories like those shared by Stead are not proof that C. megalodon or other monster shark lives.

Consider Stead’s account. The passage is a memory that a group of people said they saw, something that very few details could be agreed upon. We are left with the unknown observational skills and questionable integrity of the fishermen and what Stead was able to remember decades after the fact. The case boils down to “Someone said they saw something.” And the fact that C. megalodon favorite warm coastal seas is a knock through idea that the shark lurks in the deepest depths – if the giant shark became a deep-sea predator in the past 2 million years, it would be now a shark very different from the whaler once upon a time. The idea that the huge shark escaped extinction is enticing, but the case itself is not at all compelling.

*[A note on nomenclature. I know the shark is popularly called Megalodon, but there’s actually a genus that already bears that name. As paleontologist Julie Reizner pointed out to me, Megalodon is a fossil bivalve. My inner paleontological pedant is tickled when hyped documentaries gasp at the thought of a “100 foot Megalodon” – such statements only make me think of titanic shellfish.]

The prehistoric giant predatory shark is just one variety of sea monster that has captured the continued attention of cryptozoologists – often self-proclaimed experts dedicated to finding “hidden” animals such as Sasquatch, the Loch Ness Monster. , the Chupacabra and other large, strange, and disturbing animals that have a knack for living just beyond the reach of our investigations. When I was a child, I wanted to be one of those explorers.

The Loch Ness Monster, in particular, captured my imagination because of photos that appeared to show the distinctive fins of a long-necked, four-paddle plesiosaur-like animal. I read all the monster books at my school and local libraries looking for more information, and drew dozens of interpretations of what I thought Nessie really looked like. And, over time, I realized that all the accumulated “evidence” for such a creature was either fake, misunderstood mundane phenomena, or nothing more than tall tales. The fins that convinced me so much when I was a kid were the worst of them all. I had no idea the photos had been artistically altered to look like plesiosaur fins – the original photos only show bubbles and darkness. I really wish I had a book like Abominable Science by Daniel Loxton and Donald Prothero back then.

As odd as it may sound about a book that mostly debunks the alleged existence of Sasquatch, Yeti, Nessie, Sea Serpents, and Mokele Mbembe, Abominable Sciences is a loving tribute to the monsters we wish existed. The key is that Loxton and Prothero, in tandem, spend a lot of time tracking how we actually created these monsters. Explorers who misunderstood the local traditions of people from the African jungles to the Himalayas spawned new myths, and even classic monster movies – King Kong most important of these – helped inspire stories of aquatic puzzles. It is no coincidence that the narrative that established the canonical image of Nessie corresponds almost exactly to a scene from King Kongespecially since the story aired right after the film began.

By debunking each chosen case, Loxton and Prothero blend personal testimony with deep historical scholarship. As Prothero pulls back the curtain on how shows look like Monster Quest are simulacra that attempt to tamper with scenes and obscure the questionable credentials of their star experts, Loxton uses his experience as a shepherd to show how your eyes — and your mind — can play tricks on you, even in familiar surroundings. Seen out of the corner of the eye at the right time, an inanimate stump may appear to be Bigfoot, while what appears to be a dog at the edge of the herd may turn out to be a grizzly mother and her cubs. Coupled with historical breakdowns of where monstrous myths originated and how they are spread, the personal accounts will no doubt help readers develop a well-functioning bullshit detection kit.

If the book has one flaw, it’s that Loxton and Prothero can sometimes get a little lost in the substance of their arguments. The friendly tone of the book temporarily dries up in the chapter on sea serpents during an extended discussion of how images of imaginary seahorses – purely half-horse, half-fish artistic inventions – were incorporated into the descriptions of sea monsters, and the final chapter on the nature of paranormal belief loses some of the book’s warmth in favor of a more classic feel. But, to some extent, this is difficult to avoid. Cryptozoology is based on blurry photos and thrilling encounters, while the science and historical detective work behind the legends must take a more careful and poised approach in order to successfully debunk the absurdities. Ultimately, Loxton and Prothero show that “cryptozoology” done correctly and with a skeptical eye is not much different from zoology. Finding cryptids swept away in books and basic cable programs is entertaining, but usually based more on wishful thinking than science.

Again Abominable Sciences isn’t just about monsters. Cryptozoology acts as a foil to introduce readers to the basics of skeptical inquiry and argument. And such a book is absolutely necessary given the way Loxton and Prothero ably demonstrate how easily we can go wrong. In an example relevant to sightings of giant sharks, sasquatchs, and other aberrations, consider a tale related in the sea serpent section of the book. In 1881, Captain JH Taylor related how “a huge monster”, more than a hundred feet long, had been sighted winding through the Indian port of Madras. Onlookers could swear they could see the beast’s hair and eyes. The military rushed to bombard the threat, only to find they had just attacked a huge piece of seaweed. Even people in positions of authority, whom we might consider trustworthy and of integrity, can be easily fooled.

The greatest strength of Abominable Sciences is the book’s toolkit for examining extraordinary claims. Readers don’t have to be monster lovers to get a better rating of the book’s evidence. Cryptozoology can be harmless most of the time, but it could be a sign of wicked trouble.

Does it really matter that people regularly go out into the woods in search of Sasquatch or spend hours hoping Cadborosaurus’ head will break the waves off British Columbia? Not really. Belief in the Yeti and similar creatures is absurd, as Loxton argues, but not directly harmful. Yet I also supported Prothero’s view that the pervasive belief in cryptids and related phenomena may be symptomatic of the extent to which our culture is driven by feelings and intuition rather than reflection on proofs. Even a documentary that is completely fake, and even admits it’s a fabrication, can convince many viewers that mermaids are real for no reason other than “a lot of the ocean is uncharted.” The thought stops there.

The “cryptids” dissected by Loxton and Prothero are cultural constructs. We created the monsters. That means the legends, squishy and transmutable that they are, will likely be with us for some time to come. But I hope that Abominable sciences convinces readers of this fact so that we can appreciate the myths for what they are – reflections of our wonder and fear as we venture into the woods at night or swim to that frightening point where our feet cannot no longer hit bottom.

Tales from the Cryptozoologicon: Megalodon!