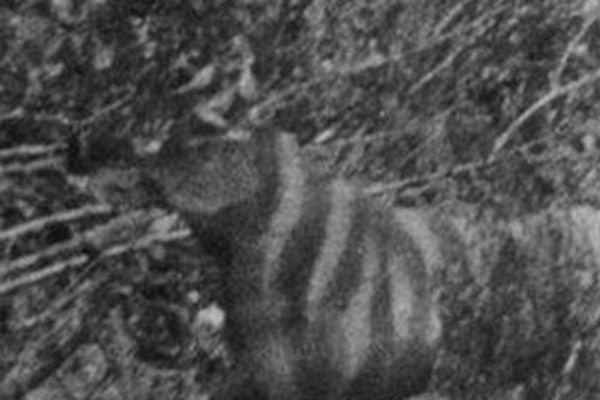 Longtime readers will recall the story of the 1964 photo of the ‘Ozenkadnook Tiger’ taken by Rilla Martin in western Victoria, Australia and presented as a supposedly real photo of a striped mammal. running in the bush. This black and white photo – of which the original is now lost – is supposed to show one of those “thylacines of the continent” so beloved of cryptozoological traditions. I have covered the case at least twice here at Tet Zoo, most recently because I included a section on the photo in my book Hunting monsters (Naish 2016). I apologize for covering it up again. However, there has been a development … sort of.

Here I want to avoid discussing the whole matter again (see the articles linked here for much longer accounts) butâ€¦ let me note that due to (1) the odd aspect of the beast in the picture, (2) the unlikely scenario in which Martin successfully photographed it (have you ever tried to photograph an animal running, from a car, while moving?), and (3) felt from Martin’s body language quirks that she wasn’t quite honest in a TV interview … oh, not to mention (4) the likely fact that the large striped marsupial carnivores probably didn’t exist in them. 1960s in Victoria anyway … my conclusion in the book is that the case was most likely a hoax (Birth 2016). This comes as a result of years of speculation in which I have asked several correspondents to tell me how they can identify the animal there as a true living beast, possibly even a modern thylacoleonid (see too Shuker 1989, Healy & Cropper 1994, Smith 1996, Williams & Lang 2010).

On Friday of last week – a day before I was due to speak about cryptozoology at the Oxford Literary Festival – an interesting article appeared in Australian weekend. Written by Canberra-based columnist Jack the Insider, the article commemorates cartoonist and cartoonist Bill Leak, who died earlier in March. He says Leak had “a good degree at pranking,” and (between discussions of many hilarious prank stories) states that Bill, his father and a companion once “made a form of thylacine out of cardboard, the painted with the stripes in about the right places and armed with a box of brownies, took a snapshot of their homemade Tassie Tiger in the bush. â€They were inspired by local sightings from the Goroke area to Victoria .

And so a famous hoax photo was born, good enough to gain traction in national and international news and “start a thylacine hunt”. That level of interest was never intended, the article says, so the Leak family made alibis, hid the fake thylacine in a shed, and agreed to never talk about the incident. The cardboard model was then destroyed. So far everything has been fine, but where is the connection with Rilla Martin?

I asked Jack the Insider: he assumed Martin had somehow agreed to take credit for the photo, but other details aren’t clear yet. If there is any truth to this hoax claim – personally I think there is – maybe more details will emerge over time. As always, we must remember not to accept confession-type stories too easily (and thus be guilty of confirmation bias). But, here we are … I have a feeling that we are indeed approaching the resolution and closure of this particular case.

For previous TÃªt zoo articles on this case, see …

Naish, D. 2016. Monster Hunting: Cryptozoology and the Reality Behind the Myths. Arcturus, London.