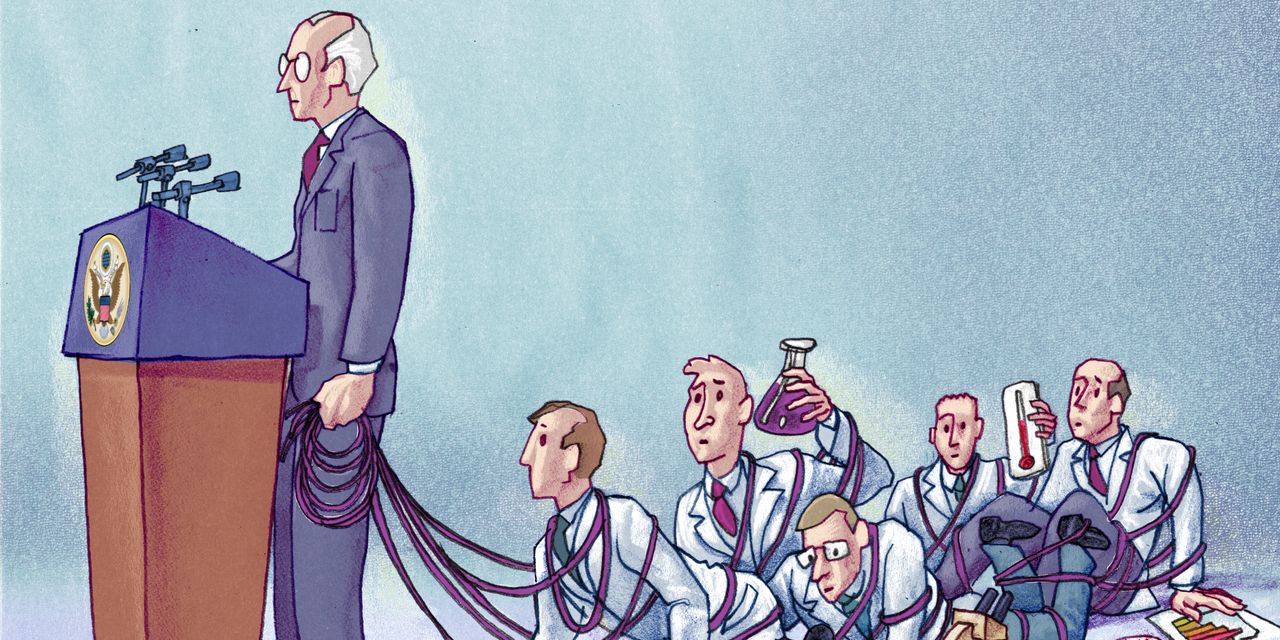 Medieval thinkers claiming infallibility often claimed to have received direct revelation from God. Since the 19th century, secular thinkers have invoked science. As Anthony Fauci said in June, “a lot of what you see as attacks on me are quite frankly attacks on science.”

It can often be said that a call to science is unjustified without knowing anything about the science in question. If science is treated as a solid block, each part of which is as unmistakable as all the others, then science has been misunderstood. Science always contains proposals less firmly anchored than others: on the frontier, newly discovered, based on experiments that are difficult to reproduce.

Parts of climate science have been tested countless times, like the greenhouse effect, but specific predictions about rising temperatures and their effects have often been shown to be wrong. Early last year we were treated to the delightful spectacle of Montana Glacier National Park, removing signs that its glaciers would be gone by 2020. Some scientific claims turn out to be false; that’s how science works. Those who claim that to doubt any part of the consensus is to be “anti-science” or “a denier” are themselves unscientific.

Science operates through a process of criticism. Scientists do not experience divine revelations, they offer hypotheses that they and others test. This rigorous testing process gives science the persuasive force that ordinary journalism lacks. If a scientific journal expels editors or peer reviewers for not accepting a dominant theory, that process has been bypassed. Those who call for such expulsions have missed out on most of how science works. These are the real deniers, far more dangerous to science than a religious fundamentalist who believes the world is 6000 years old.

When researchers fear losing a grant or being the object of personal attack if they question a predominant belief, that belief is no longer scientifically grounded. True or false, that’s superstition in scientific attire. Science has been replaced by what the Soviets called “partisan science”.

To doubt a scientist is not to doubt science. On the contrary, personal authority is precisely what science dispenses with, as much as possible. Dr. Fauci’s assertion of authority creates skepticism about all of his claims – rightfully so, because the distinction between science and a particular scientist is essential. Granted, non-scientists often have to trust scientists to inform them of what science has discovered. But this is all the more the reason why scientists have a responsibility not to let political or other unscientific criteria affect their explanation.

It is now considered an open question whether the Covid virus escaped from a laboratory in Wuhan, China. But when the virus first emerged, dozens of scientists published a statement in the Lancet expressing â€œsolidarityâ€ with their Chinese colleagues. â€œThe rapid, open and transparent sharing of data on this epidemic is now threatened by rumors and misinformation about its origins,â€ the statement said. â€œWe stand in solidarity in strongly condemning conspiracy theories suggesting that COVID-19 is not of natural origin. How did epidemiology discern that the ideas were not only unfounded but conspiratorial?

Now that new evidence has emerged, did these scientists denouncing the plot admit to having overstepped? No. In another statement to The Lancet in July, they said, â€œWe reaffirm our expression of solidarity with those in China who then faced the epidemic. Solidarity is a social, not a scientific category, and a judgment as to whether scientists in an authoritarian regime have been pressured is not scientific either. Anyone who has studied Marxist-Leninist regimes knows that it is possible that “solidarity” is not with scientists but with the authorities who supervise them.

To explain their previous statement, the scientists remind us that â€œwe have observed escalations of conflicts that pit many parties against each other, including the central government versus the local government, the young versus the old, the rich versus the rich. poor, people of color versus whites and health. priorities in relation to the economy. Justifying a scientific claim with such socially charged considerations is, again, partisan science. To the extent that scientific claims are informed by political considerations, they are no more grounded than purely political claims.

If scientists expect their statements to be trustworthy, they must themselves be trusted to make them. It is better to be scrupulously honest before asking people to give up their own judgment and simply believe what they are told. Scientists should be particularly careful not to distort political or political judgments as scientific. And they must protest vigorously and loudly when other influential people claim to speak for science while distorting it.

Dr Fauci admitted that he initially said the masks were ineffective in part because there was a shortage of masks and he wanted to preserve them for medical workers, who needed them most. He doesn’t seem to have thought about it: once he withholds the truth for a political reason, why shouldn’t reasonable people assume that his other statements are based on political considerations rather than scientific ones?

Perhaps the clearest sign that a scientist, or someone else, is distorting science is the confusion of a science with political or social claims it is supposed to involve. This is what social Darwinists and Soviet dialectical materialists have done. Such claims are never scientist. They are a clear sign of pseudoscience. We must argue for or against the social or political implications of a scientific discovery in the same way as for any social or political idea.

When President Biden, or a politician from any part of the political spectrum, claims he is only “following the science”, one can be sure he is not. Should we lock? Lockdowns, like any other policy, come with costs as well as benefits. How to weigh them? Not by epidemiology, which has nothing to say about the costs to children, small businesses, performers, and human enjoyment in general. Science can inform a political decision, but whatever judgment one makes, it cannot be entirely based on science.

When reasonable people stop trusting science in one case, how can they be persuaded in another? At the end of the Soviet Union, hardly anyone trusted government statements about natural or man-made disasters like Chernobyl. How are we going to deal with the next crisis about which scientific understanding has something to contribute when scientists are known to base their claims on political preferences? It’s part of the cost of the Lancet scientists’ accusation and Dr Fauci’s lack of frankness.

The greatest danger to public confidence in science does not come from uneducated people but from politicians and journalists who claim to speak for science. More so, it comes from the scientists themselves, either because of what they say publicly in the name of science, or because of their inability to correct the misconceptions of others.

High rates of wildlife-vehicle collisions during the COVID-19 pandemic