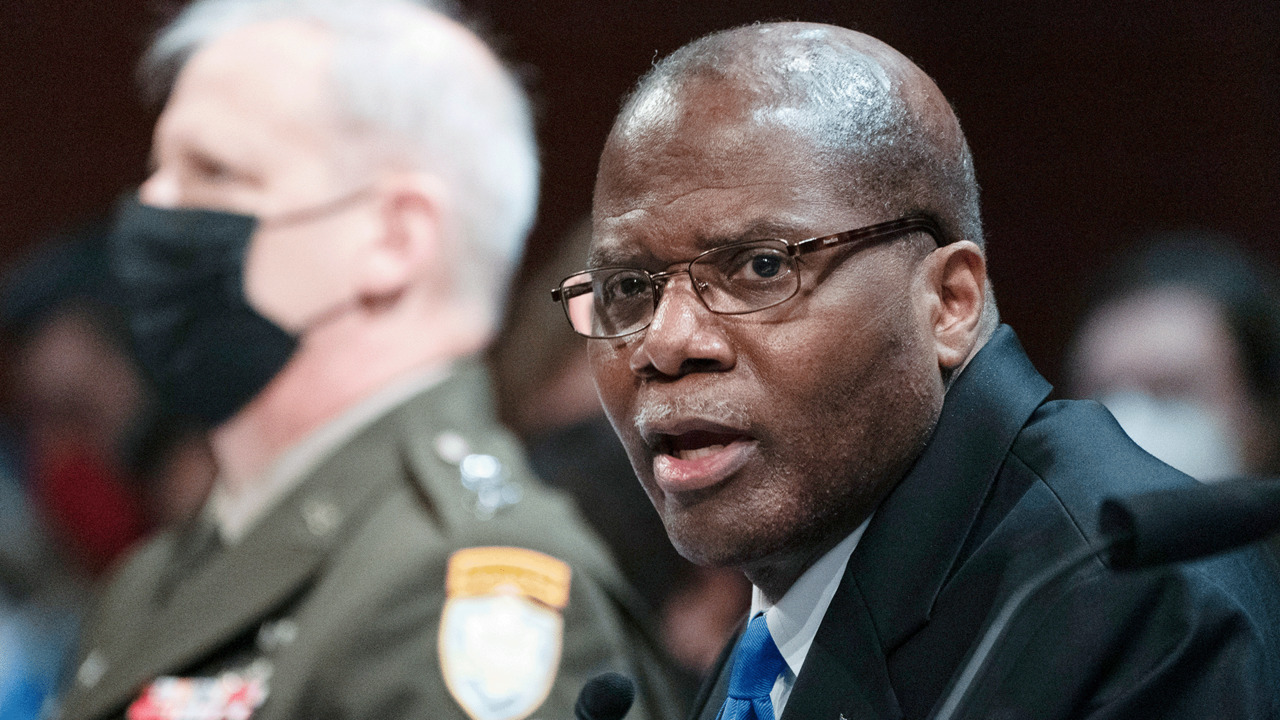 Some also came dangerously close to US planes, Bray said. “We haven’t had a crash. We’ve had at least 11 near-misses, though,” he told Rep. Raja Krishnamoorthia Democrat from Illinois.

The updated figures, which also include some recently emerged historical cases, are more than double what was reported in a preliminary report to Congress last June that identified 144 UAPs, including 18 that maneuvered in a way that appeared to defy known aerodynamics.

The details came in a rare open session in which senior US intelligence officials were pressed to reveal what they knew about the highly secretive and controversial mystery. The hearing focused on widely held conspiracies that the government obtained information about crashed UFOs (they said they did not) and whether they had investigated high-profile UFO cases such than the one who allegedly stopped nuclear missiles in Montana decades ago (they didn’t and promised to look into the matter).

The hearing came amid an internal row over how much to share with the public, and as lawmakers slammed intelligence agencies for being less than forthcoming about what they’ve learned so far. here.

‘Not been done before’

Ronald Moultrie, the DoD’s undersecretary for intelligence, has pledged to apply “rigorous scientific analysis” to the study of the origin of UAPs through the newly created Pentagon. Synchronization group of the identification and management of airborne objects.

“A methodical approach is something we do that has never been done before,” he said.

He also described his own curiosity about the unknown and the potential implications of solving some of the UAP’s mysteries, including a light-hearted revelation that he attended science fiction conventions.

“I like the challenge of what can be out there,” Moultrie said. “I followed science fiction. I even went to conventions. I’ll say it for the record. But there is nothing wrong with that. Don’t necessarily dress up, but I think it’s important to show that the Department of Defense … we have character and we are people like you, like the American people.

“We have our curiosity, we have our questions,” he added.

One of the most unusual moments of the hearing was when witnesses played for the committee cockpit video taken over a military training range of a passing spherical craft in broad daylight.

“I don’t have an explanation of what this specific object is,” Bray told the panel.

Requested by Rep. Adam Schiff (D-Calif.), the chairman of the committee of the whole, if data on the craft was captured by multiple sensors — not just video — Bray declined to respond in public, deferring to a later classified session.

“I think it would be more appropriate to address this issue behind closed doors,” he said.

But he said the video footage was not the only evidence. “In this case, we have at least that,” he said.

Moultrie also said that often military and intelligence sensors are not able to collect enough data. “Sometimes it’s very fleeting data that we have on some of these objects,” he said. “We want to make sure we calibrate it for things of this nature and size, things of this speed.”

Moultrie also deferred to the classified session at the rep’s request. Rick Crawford (R-Ark.) if sensors have detected underwater or submerged PANs.

“We have no equipment”

And panel members weren’t shy about pressuring witnesses on some of the most controversial theories and claims.

“Do we have organic or inorganic materials that we know nothing about? asked the representative. Jim Himesa Democrat from Connecticut.

“As far as the hardware we have, we don’t have hardware,” Bray replied.

representing Mike Gallagherwho is also a member of the Armed Services Committee, had Moultrie say publicly that he was unaware of any official UFO research efforts between the Air Force’s shuttered Project Blue Book. in 1969 and the short-lived Advanced Aerospace Threat. Identification program created in 2007.

Moultrie also told Gallagher that he was not aware of any programs dedicated to studying UAP technology outside of the current effort.

“I’m not aware of any contractual program focused on anything related to this other than what we’re doing in the task force…and what we’re about to launch in terms of effort,” did he declare.

“I’m not aware of anything outside of what we’re doing in the UAP task force,” Bray also added.

Gallagher also asked about a far-reaching report of a “brilliant red orb” reportedly observed over Malmstrom Air Force Base in Montana, “in which 10 of our nuclear ICBMs were rendered inoperative”.

“I would like you to look into that,” Gallagher said.

“We’ll go back and take a look,” Bray agreed.

Gallagher also placed on file a copy of unverified 2002 meeting notes called “Admiral Wilson’s memo” which purports to reveal government officials and contractors discussing how they were prevented from accessing information about crashed UFO materials.

The claims have been hotly debated among ufologists, but never substantiated. One of the people named in the document, Eric Davis, who is now a senior project engineer at the government-funded Aerospace Corp., declined several interview requests from POLITICO.

Moultrie and Bray said they were unaware of the document.

Bray explained the evolution of the process of compiling and analyzing UAP reports.

First, he said, “it goes through the operational chain of command … and also through the UAP task force so they can take that data, put it in the database and quite often that individuals from the task force contact the airman and ask them for additional questions if there were things that were unclear in the report.

Second, “this thing goes into a database where we can compare it with other sightings we have – again, comparing locations, comparing elevations, speeds, shapes, if any [radio frequency] emissions]have been detected from the platform … so we can try to draw conclusions on this,” he added.

In his prepared testimonyMoultrie maintained that “it is the Department’s assertion that by combining properly structured collected data with rigorous scientific analysis, any object we encounter can likely be isolated, characterized, identified, and, if necessary, mitigated.”

This includes whether the reports can be explained by potential technological breakthroughs by allies or adversaries, secret US vehicles or “commercial platforms”, or “natural or other phenomena”.

He described them as “airborne objects which, when encountered, cannot be immediately identified”. The hearing did not address reports of craft appearing to transition to and from sea, air and space.

Moultrie also acknowledged that the “cultural stigma” surrounding UFOs has crippled efforts to explain the phenomenon by preventing witnesses from coming forward.

“Our goal is to eliminate this stigma by fully integrating our operators and mission staff into a standardized data collection process,” he said at the opening of the hearing. “We believe that making UAP reporting a mission imperative will be critical to the success of this effort.”

But panel members also seemed suspicious that the department will follow through without more aggressive oversight.

“You have to show Congress and the American public, whose imaginations you have captured, that you are prepared to follow the facts wherever they lead,” Carson told witnesses. “I sometimes worry that the DoD is focusing more on what it can explain, not what it can’t.”

Carson also said more hearings are in the works. “The last time Congress held a hearing on UAPs was half a century ago,” he said. “I hope it won’t take 50 years for Congress to organize another one. Because transparency is desperately needed.

Schiff added, “It is also the responsibility of the government and this panel to share as much as possible with the American people — because excessive secrecy only breeds mistrust and speculation.”

On the question of how much to share with the public, Moultrie said the DoD “is fully committed to the principles of openness and accountability to the American people.” However, we are also aware of our obligation to protect sensitive sources and methods. »

“Our goal,” he added, “is to strike that delicate balance – one that will allow us to maintain the public’s trust while preserving the capabilities that are vital to the support of our service personnel.”

But that doesn’t mean looking for all UFO reports, Moultrie said, saying military and intelligence agencies need to focus on what could be a real threat to aviation safety or security.

“One of our concerns is that there are a lot of individuals and groups who are spreading information that could be considered somewhat self-serving,” Moultrie told the rep. Darin La Hooda Republican from Illinois.

“Anything that distracts us from what we have with the resources that have been allocated,” he continued, distracts national security agencies “on bogus chases and hunts that are simply not helpful. They also contribute to undermining the confidence of Congress and the American people that we are trying to find the root cause of what is happening here.

But he also insisted that the ministry wants to share what it can with other organizations inside and outside government.

“What we don’t want to do is bring something into a DoD database for DoD exploitation and then have so many envelopes that it’s not available to those who really need to look at it for exploit it,” Moultrie said.

This means relying on other government agencies for assistance when collecting data that is outside the expertise of military or intelligence experts.