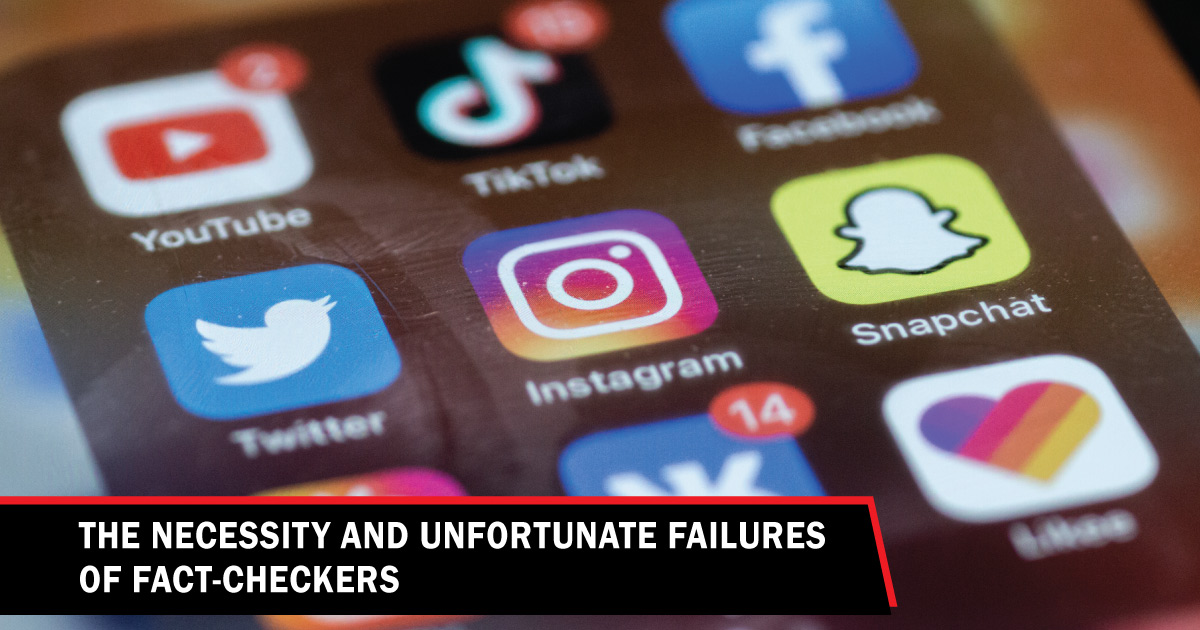 The Necessity and Unfortunate Failures of Fact Checkers

January 1, 2022 not only ushered in the new year, but also marked the 39th anniversary of the founding of the internet. And with the launch of Myspace and Facebook in the early 2000s, it will soon be 20 years since social media has been a part of everyday life for the majority of Americans.

But with the internet’s ubiquitous ability to connect people comes an endless array of voices crying out conflicting facts and stories. And that is perhaps one of the biggest consequences of opening this virtual Pandora’s box: the rise of fake news and misinformation.

The fact-checking movement has sought to address this epistemological crisis, but their recent efforts are far from perfect and some of their methods, especially on social media platforms, seem counter-intuitive.

Fake News and the need for Fact-Checkers

Fake news is not a new phenomenon, but it has become particularly prevalent around the Clinton-Trump presidential campaigns. For example, a headline that circulated amid the 2015 Syrian refugee crisis read, “Donald Trump presents ‘Nazi’ plan forcing all Muslims and refugees to wear name tags.”

Although it gained traction on the internet, the story was false. Paul Horner, one of the most prolific fake news creators of the time, conceived the idea and posted it online. For Horner, writing bogus stories was a lucrative business. In fact, around 2016, he was making $10,000 a month just by posting fake news.

Horner, and other fake news makers like him, posed a serious threat to society’s relationship with reality. Obama even mentioned such dangers at a press conference in 2016.

Speaking about the sophistication of fake news, he warned that “if everything seems to be the same and no distinction is made, then we won’t know what to protect. We will not know what to fight for.

“And we can lose so much of what we’ve gained in terms of democratic freedoms,” Obama continued, “and market economies and prosperity that we’ve come to take for granted.”

In 2019, American citizens also began to recognize the dangers of fake news. In fact, 50% of Americans said that made-up news and misinformation is a “really big problem in the country,” according to Pew Research.

In response to this pervasive problem, fact-checking entities – websites like politifact.com, factcheck.org and snopes.com – have become increasingly popular. The original concept of fact-checking was also foolproof: creating teams of researchers dedicated to consulting experts in various fields to uncover the truth about a case.

Most notably, the narrative surrounding the “lab leak conspiracy theory” of COVID-19 forced fact-checkers to do an about-face last year, after previously censoring social media posts suggesting the virus could have been made in a lab.

But the Lab Leak debacle isn’t the only misstep for fact-checkers. As third-party fact-checkers seek to help social media platforms censor misinformation and disinformation, they have given users substantial reason to question their validity.

Towards the end of 2021, veteran television journalist John Stossel sued Facebook for alleged defamation. This came after Climate Feedback, one of Facebook’s third-party fact checkers, flagged two of Stossel’s videos as misinformation.

By following the “See Why” link, users are taken to Climate Feedback’s “verdict page,” where fact checkers explain that wildfires in the United States are “influenced by a variety of factors, including weather, climate change, past fire suppression practices and an increase in the number of people living near wild lands.

Although the statement is scientifically verified, Stossel’s video never claimed otherwise. As stated in Stossel’s lawsuit, “the scientific findings of Climate Feedback’s ‘Key Take Away’ and Stossel’s Fire Video are substantially identical: they both claim that climate change and land management practices are each causes of forest fires” (emphasis added).

Facebook’s response to Stossel’s lawsuit largely blamed third-party fact-checkers. But an interesting part of his argument states: “Stossel’s claims focus on fact-checking articles written by Climate Feedback, not labels posted through the Facebook platform. The labels themselves are neither false nor defamatory; on the contrary, they constitute protected notice(emphasis added).

Facebook’s admission that their misinformation labels constitute opinion is apparently counterintuitive to the basic purpose of fact-checking.

Stossel censored because of his tone

Even more disturbing, “Are We Doomed? by Stossel. climate change video has been flagged as “partially fake” because of what it implicit. This came to light when Stossel contacted San Jose State University assistant professor Patrick Brown, who was one of the scientists who verified the article.

After claiming that Stossel had “played down” the reality of climate change, which Stossel profusely denies, Brown said, “It’s a tonal thing, I guess.”

Twitter has also attempted to filter out misinformation on its platform over the years. And as is the case with most fact-checking efforts on social media, Twitter is focusing more on misinformation related to COVID-19.

In his COVID-19 Misleading Information PolicyTwitter states that for a tweet to violate its policy – and therefore be censored – it must “make a statement of fact, expressed in definitive terms; be manifestly false or misleading, based on widely available and authoritative sources; and be likely to affect public safety or cause serious harm.

In a related case, Dr Li-Meng Yan, a former researcher at the Hong Kong School of Public Health, was suspended on Twitter in September 2020 for suggesting that the Chinese government had covered up evidence that the virus had leaked from ‘a laboratory.

However, it is unclear how Dr Yan’s tweet violated the platform’s policy (which was last updated in December 2021) as the policy makes no mention of the origins of the virus, its potential creation , the inclusion of a laboratory or the Chinese government. Additionally, Twitter declined to comment on the matter when contacted by the New York Post.

However, just five days later, the House Foreign Affairs Committee, in its first report investigating the origins, echoed Dr. Yan’s claim. “There is no doubt that the CCP [Chinese Communist Party] actively engaged in a cover-up designed to obfuscate data, hide relevant public health information, and suppress doctors and journalists who attempted to warn the world,” the report states.

Twitter has since revised its fact-checking methods. On August 2, 2021, Twitter announced that it would begin working closely with the Associated Press and Reuters for fact-checking purposes. According to Poynter, this marked “the first time Twitter has sought advice from professional fact-checkers in an effort to improve its information ecosystem.”

While the move demonstrated Twitter’s dedication to facts, it may not result in a resounding endorsement from its users, as Thomson Reuters Foundation Chairman James C. Smith also sits as a member. of the Pfizer Board of Directors. Smith even served as President, Director and CEO of Thomson Reuters Corporation until 2020.

While there’s nothing illegal about it, Smith’s dual stance optics don’t signal “objectivity” to Twitter users, especially when it comes to fact-checking. vaccine tweets.

The benefits of fact-checking

Cases like these indicate that fact-checkers are increasingly drifting away from their central duty – opting for the police tone and subverting plausible assumptions instead of simply pursuing the facts. And if facts are susceptible to subjective interpretations of tone and opinion, how can social media users be expected to read the minds of these third-party fact checkers?

The unfortunate consequence of these failures is the looming public distrust of fact-checkers on social media as the Russian invasion of Ukraine unfolds rapidly. There have already been several cases of misleading attributions of erroneous videos and photos on the platforms since the conflict began.
If even professional fact-checkers can’t be trusted to seek out and preserve the facts, how can Americans know “what to protect” and “what to fight for?”