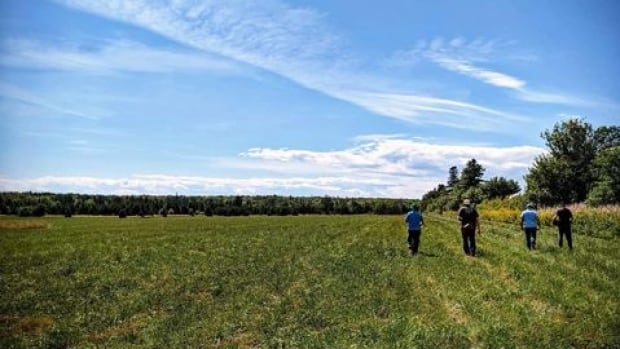 Dave Ross and a few other UFO enthusiasts packed a drone and metal detector last Sunday and went to explore a farmer’s field in Ebenezer, Prince Edward Island.

The day before, August 22, it had been 30 years since witnesses had reported an unidentified glowing object that had landed in the same field.

Ross didn’t necessarily expect to find anything three decades later, but he couldn’t resist the temptation to at least take a look.

So he contacted the woman who still owns the property to see if that would bother her.

We can’t be the only species, you know, in this whole universe.-Dave Ross

According to Chris Rutkowsky, the chief researcher of Ufology Research, a Winnipeg-based amateur group that documents and analyzes UFO sightings in Canada, there were several sightings of strange objects in the sky on the night of the 22nd. August 1990. Witnesses described a white object that looked like a large ice cream cone falling from the sky near Ebenezer and continuing to glow for about two hours after it landed.

“The RCMP confirmed that they had received more than a dozen calls about the Ebenezer object and had sent two officers to investigate. They noted that an officer could see it in the distance, but he did. just lost sight of it. ” Rutkowsky wrote in a 2010 blog.

Rutkowsky said helicopters and military planes arrived and began to fly over the area. A witness told Rutkowsky years later that she saw something covered with a tarp being blown away on a flatbed truck.

“Encouraged by the possibility that the object was in fact a meteor that could have fallen, a group of 30 amateur astronomers from the Charlottetown Astronomy Club searched the area the next morning, but found nothing of interest,” wrote Rutkowsky.

NORAD and CFB Halifax insisted the UFOs were attributable to meteors, Rutkowsky wrote. He quoted a newspaper article saying, “No military agency would say if something hit the ground.”

Thirty years later, Ross and his band haven’t found anything of interest either, other than a few deep impressions in the ground. They took soil samples but did not have them analyzed.

â€œIt was great, it was so good to be in the same region where it happened,â€ he said.

Ross, 54, said he knew there were skeptics, but he wasn’t put off. He’s been interested in UFOs ever since he started reading crop circles books when he grew up in Charlottetown.

â€œPeople say, you know, ‘UFOs? You’re a little crazy, “but I knew there were other people who had the same interest as me.”

He recently launched a Facebook page for UFO enthusiasts, which has over 300 members. In addition to UFOs, they share stories about other paranormal topics such as Bigfoot, mysterious underwater objects, and of course, other sightings from Prince Edward Island.

Ross said he wanted to learn more about an object that landed in Conway in the late 1960s and the bright flashing light above the water that a camper reported in 2014 at the Twin Shores campsite near of Kensington.

John was trying to contact Netflix aliens is amazing and touching

The 50 Best Alien Movies Ever Made | Movies